Place de la Republique, which borders the 3rd, 10th and 11th districts is one of the largest squares of the capital at more than 33,000 square meters. It is located at the site occupied in the 14th century by the stronghold of Charles V's Porte du Temple enclosure. It has not much changed over the centuries. Decorated in 1811 with a fountain called the "Château d’Eau", it took on its present appearance during the Second Empire, in the 19th century, with the creation of Avenue Magenta, Avenue de la Republique, and Boulevard Voltaire.

A meeting place for discussion and gatherings, many boulevard theaters were established in this neighborhood, particularly along the Boulevard du Temple, among them the “historical theater” and the “lyrical theater” founded by Alexandre Dumas in 1847 and closed in 1850. It was also possible to admire the first photographs of Daguerre there, inventor of the famous Diorama method. In 1866 the first shops were built throughout the northern part of the square.

In 1879, a competition was launched to choose a design for this public space, then called "Place du Chateau d'Eau". The project chosen was centered around the building of a monumental bronze statue of Marianne with the Republican allegorical figures depicting Liberty, Equality and Fraternity.

Over 130 years later, the Place de la Republique is preparing to receive a helping hand with the adoption of a redevelopment project after the launch of a competition held in 2010 by the Mayor of Paris, Bertrand Delanoe.

The Place de la République is a space from which much is expected, the type of public space which, considered belonging to "all" must meet multiple - sometimes contradictory - requirements in the city "for all". This is why an extensive poll was set up to collect as many perspectives from neighborhood councils, the local planning workshop, the youth council, the local board of disability, the union of shopkeepers, craftsmen, professionals and residents (UCARP) association, as well as residents of the area; all filed their analysis and wishes in the register available to them at the town hall and on the website of the City of Paris.

The project selected was that of the team Trévelo & Viger-Kohler (TVK). This project modifies the current composition of the square by creating a large plaza on the north side, reserved for environmentally friendly modes of transport and extending along the Rue du Faubourg- du-Temple, thus forming a pedestrian link to the Canal Saint-Martin.

The large central square will allow reclaiming a bold public space with an area dedicated to pedestrians expanded by over 50%: wider sidewalks, large multipurpose plaza, a convivial space with trees. In this manner, the city of Paris wishes to promote a new use of  Parisian public space, meeting the expectations of residents and users widely expressed during the exchange of viewpoints.

The new site, more attractive and much friendlier, will organize cultural and civic events as well as develop a neighborhood life linking three different arrondissements and services such as their markets, terraces, and children's entertainment; it also includes the creation of a reflecting pool on the central part of the square, plus a ban on vehicles to circulate around the famous Marianne.

The project also attaches particular concern to the maximum preservation of existing trees that contribute to the identity of the square.
The new site, on which work began in January 2012, should be ready in spring 2013. Long live Republique!

The new place de la Republique : a veritable renaissance for the end of 2013

Bertrand Delanoë has chosen the Winner of the project for the redevelopment of the Place de la République. The project is that of the team Travelo & Viges-Kohler (TVK) and it will remodel the design of the current square. 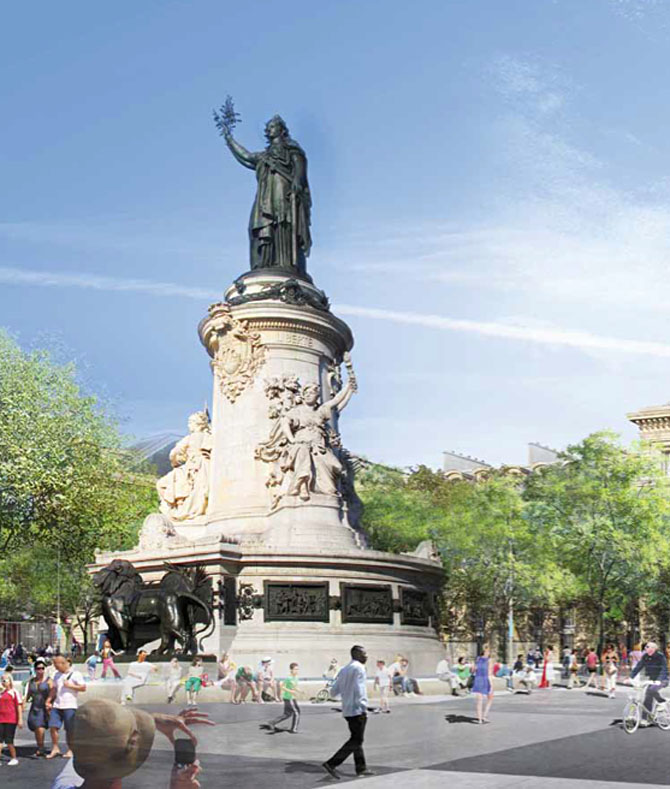 A wide pedestrian esplanade of two hectares long will be built around the statue of the Faubourg du Temple to the rue Yves Toudic, permitting pedestrians to reach the Canal Saint Martin.

Play and relaxation areas will allow pedestrians to have a coffee on a café terrace, meet a friend on the steps, read next to the statue shaded by trees, or refresh themselves during the summer heat in a clean water source designed expressly for this purpose. 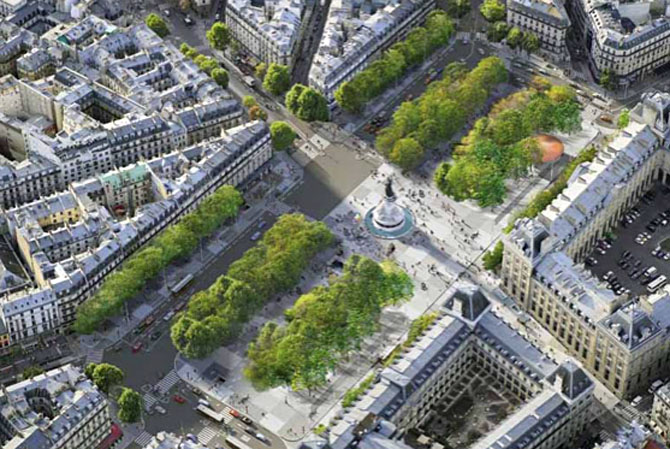 Sidewalks will be widened to grant easier movement for pedestrians and deliveries. Access to buses and metros will be easier, and a bus and taxi route will be provided as well a bicycle path. Cars will circulate in both directions on three sides of the square.

A Velib’ and 'Autolib’ station: additional parking spaces will be  developed for the self-service bicycles and electric cars. The new Place de la République plans to refocus its gaze on the mythical statue and will offer, day and night, a veritable cultural and tourist route. The square will allow the organization of cultural and civic manifestations in the heart of a neighborhood that will be then open on all three resident districts: the 3rd the 10th and 11th.