Dare to be sexy and wear fancy outfits in the most provocative shops you can find in the Marais. If you want to express your desires and imagination, you must have a look down rue Quincampoix. You'll find two sexy shops which offer a wide range of clothing and accessories of great quality! If you are looking for vintage or made-to-measure items, you definitely have to go in the Haut-Marais, rue de Poitou. Leather bracelets, provocative high heels, corsets and so on, at every price for every taste! 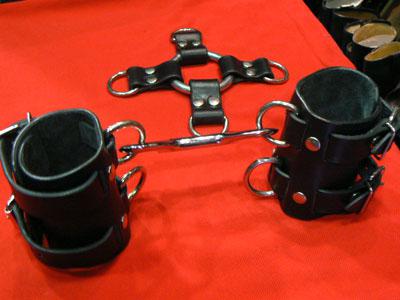 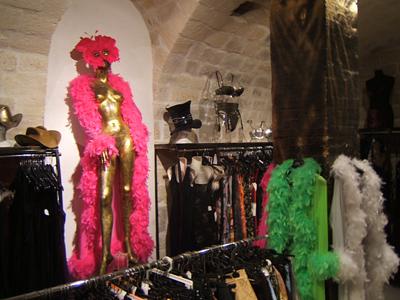 Is Paris the capital of Fantasy ?

Most definitely and today more than ever! Le Marais is not Pigalle – and never will but fantasy has its scene in le Marais, even if it remains discreet. It s not underground, nor official - just in between. You have to have the good connections in every field! For sure some gothic cellars have much more to offer than just history, just follow our guide exploring the sexy side of Paris oldest district.

Libertinage is a French invention. As early as the18th century, Paris and its historical center was a place open to all kinds of fantasies - the French would not have made any fussabout a secretary called Monica as Kings of France themselves introduced to “La cour” their preférées. Louis XIV was famous for that and it was not shocking to anyone. More recently we discovered our former President Mitterand had led a double life and had had many mistresses and a secret daughter named Mazzarine. Who cares? It’s kind of a French tradition to have affairs and to be open to seduction and do one’s best to seduce too. It does not mean romance is not to be expected. If France is not the native country of Romeo and Juliet or Don Juan, it is certainly the country where they could have felt most free!

Just listen to Jacques Offenbach’sfamous Opera “La Vie Parisienne” and you ll understand why Paris is the sexiest city on earth and no one is complaining about it! Stroll down the Marais street, this is no French cancan but you ll find for sure some surprising shops to turn you into Barbarella or Tom of Finland in a minute.
One tip : there is no prostitution in Le Marais and it is illegal in France – even if it happens – of course we would not promote or advice you on this subject.
Until 1946 prostitution and what was called les maisons closes – eros centers as the German and Dutch call them, were legal but were closed down by Marthe Richard a member of parliament who wanted to protect the health and morality of the French male. It did not help much but just split the” business” into many hundreds of private uncontrolled “studios”.

Until the late 80ies the western Part of le Marais - around the rue St Martin and the rue Saint Denis - was a paradise for sex shops and “les dames de petite vertu” that were offering their services in their upstairs studios. It is no longer true as the price of real estate and a national and local policy to kick them out of here were quite efficient. Consequently they moved away further north in the direction of the Gare de l’est and Gare du nord… The oldest job in the world will not disappear as it is just part of life!
25 years ago the first gay bars appeared in le Marais, that was the beginning of a new kind of liberation. Now over 300 gay places have rejuvenated the area. Gay people are for sure the ones who have made the Marais fashionable again. Everybody seems to rely on the pink euro of this new generation of DINK ( double income no kids ) who spend a fortune in shopping and entertainment: the number one selling bar is a gay bar, some hotels make 80 % of their income with gay customers, etc. Of course it makes sense to give a warm welcome and to respect them. Being gay in Paris is certainly easier than anywhere else in the world. We have even met couples from San Francisco who definitely considered they have more freedom in Paris than in California – they ended up buying a flat in Le Marais… More gay than Castro as they said… and not as much of a ghetto. There are a lot of gay sex clubs – but also many straight and mixed clubs in le Marais, where you can meet people or even more… You ll find the addresses in the nightlife guide… but before you enter these places, you have to look good and sexy, so the first step is to follow our shopping guide!

Rue Quincanpoix is definitelly a street for Lingeries, with Métamorph’ose and just next door Phylea, two great fetish shops where you'll find everything you could possible dream of – and more - from extravagant high heels to sophisticated corsets leather bras, harnesses and black rubber evening dresses.
Prices start at only 60 euros for a nice pair of shoes…

If you definitely look for something more serious go to Rex the fetish store for both men and women on rue de Poitou - handmade leather goods, magnificent boots and anything you could imagine. A majority of clients are gay, but some straight couples dare to walk the doors and they are right, it does not cost anything to dream and imagine. Remember you are in Paris, nothing or almost nothing is forbidden, except escorting and selling your charms.

Even more serious, this time mostly for men is ROB. The great shop from Amsterdam fetish specialist for over 30 years has opened its Paris boutique ZONE 2 with a small selection - it may not be the best value for the money, but it is more affordable than ever before in Paris. Stroll down rue Sainte Croix de Bretonnerie to IEM where you’ll also find a wide selection of neo-military clothes including the most wanted firemen T-shirts.

Many not specifically fetish shops offer all kinds of leather and fetish accessories such as Demomium, a superb gothic shop located rue du Platre, a décor dedicated to medieval dark ages lovers. The fascination for fantastic and imaginary objects can be found its refuge, an old stall from the seventeenth century - cleaning old stones, erecting columns, letting the ivy climb up the walls, thus giving a soul to this den.
Dressing up sexy and fancy is not an issue in le Marais streets where you can basically wear whatever you want as long as you remain decent and do not show too much of your intimacy. Paris is liberal but not yet as much as Berlin where you can sunbathe naked in the middle of Tiergarten, the equivalent of our Tuileries Gardens!
The addresses we give you are just the best ones you can find to experience the seduction à la française, and the only limits are your own, so have fun discovering them. Naturally report to us if you find other places fun to shop - and of course, do not miss a visit to our gay pages and nightlife guide.