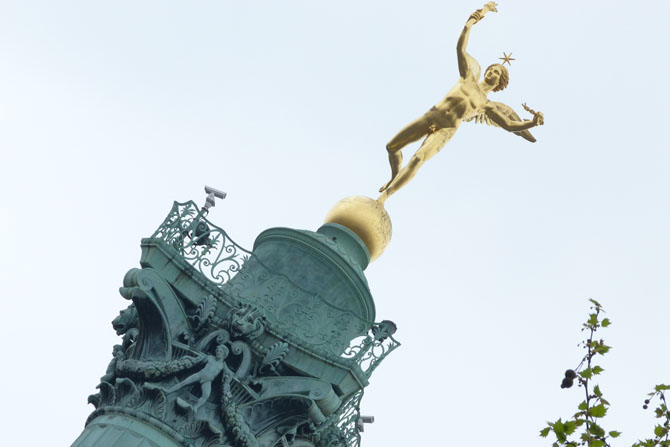 Arsenal is the Paris port that connects the Seine to Canal Saint Martin and borders the eastern part of the Marais, from the Bastille to the river. It separates the 4th district from the 12th district. Starting from the Place de la Bastille, take a look at the "Genius of Liberty" ("Génie de la Liberté") which tops the column erected in honor of the revolutions of 1789 and 1830. 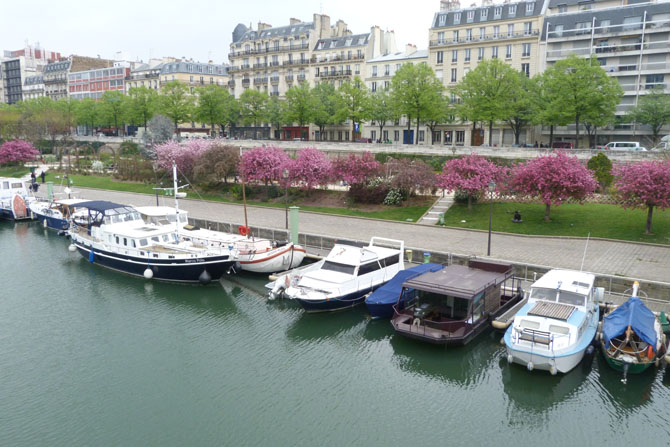 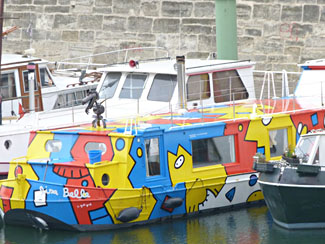 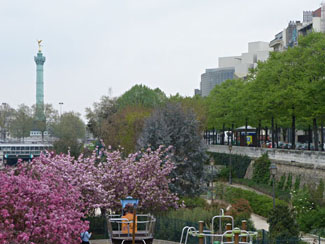 Following the destruction of the Bastille in 1789, many projects were being considered to replace what once was considered the symbol of absolute monarchy and its arbitrariness (and of its power?). One idea, favored in particular by Napoleon, was to erect a fountain in the form of an elephant, symbol of power and eternity. This project was never realized; instead, a column similar to those existing in London’s Trafalgar Square or Berlin’s Tiergarten was erected.

On the ground at Place de la Bastille, colored cobblestones draw the outline of the fortress between number 49 of boulevard Henri IV, numbers 1-5 of Place de la Bastille, and number 1 of rue Saint Antoine. We cannot see the past location of all towers, as some are obscured by buildings. Wander along the bank on foot or by bicycle and discover a very different view of the Marais, including several boats, making it more similar to Amsterdam than Paris! 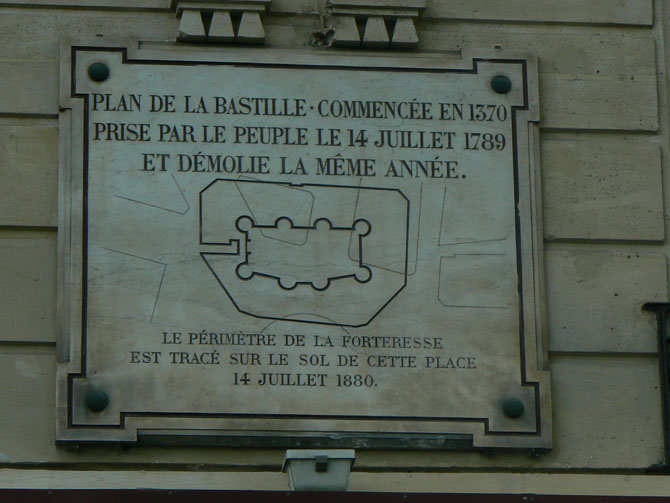 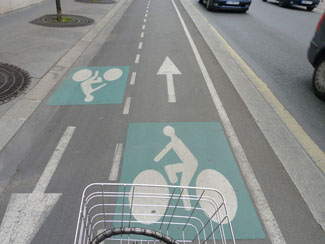 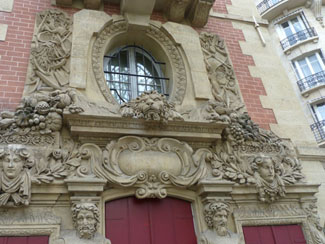 You can stroll and enjoy the terraces of cafés as well as restaurants open along the promenade, with unique views of the port. Several boats, formerly commercial, were converted into residences by their lucky new owners, thus creating a sensible alternative to traditional apartments in the neighborhood, whose prices have skyrocketed. Many projects for floating hotels or guesthouses are underway; you can find some of them in our pages dedicated to guesthouses. 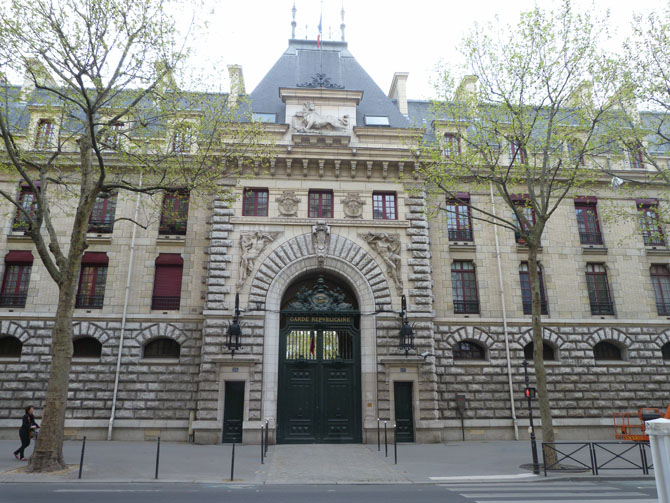 Upon reaching the Seine, turn left on the Boulevard Morland, which will take you directly to the headquarters of the French Republican Guard. Crossing the street, you reach the Pavillon de l'Arsenal, venue for exhibitions devoted to the architectural history of Paris through a selection of photographs and sculptures. You'll also discover the most spectacular interactive video map on Paris that exists. ?40 square meters in size, it allows you with a simple finger movement, as on a digital tablet, to zoom into the area of ??your choice and discover new architectural projects (highlighted). Directly across the street is a magnificent mansion of 17th century brick and stone, whose entrance is guarded by two outstanding sculptures depicting sphinxes, now converted into a highly rated private school. Taking a look at the architecture, you will discover a very sought-after iconographic grammar in the Rocaille spirit, an architectural style that is found mainly in Central Europe and is very rare in Paris. 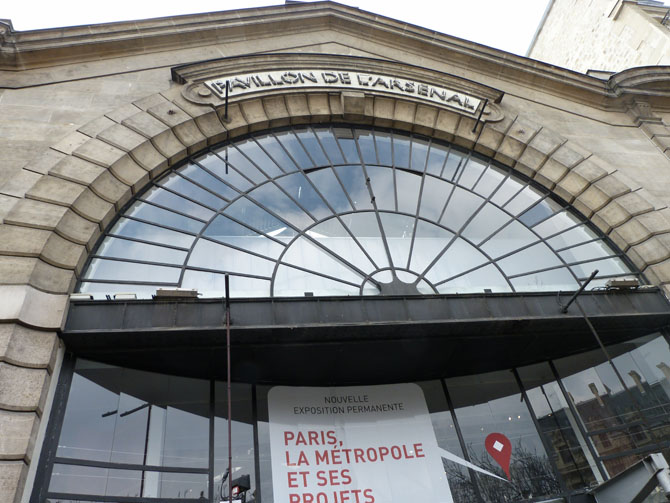 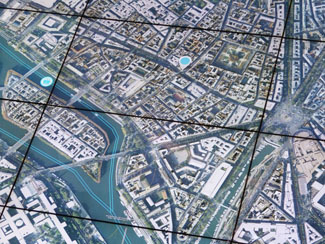 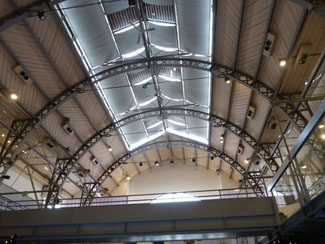 Following the river banks toward the center of town, you reach the Village Saint Paul, teeming with antique shops and businesses, many devoted to design. Retracing your steps towards the Bastille, you will discover on the other side of the square the Bastille Opera house, created at the initiative of President Mitterrand in 1984.

This popular opera house, whose style was not entirely appreciated at the time of its inauguration, has the merit of offering discounted tickets starting at 10 euros and having space for up to 3000 spectators as well as possessing truly unique acoustic conditions. The number of places available at the most discounted prices is obviously finite, however you can still get seats at good prices, often below the actual cost of the show. The cultural sector in France has the support of the government. The most expensive seats are around 150 euros, which actually represents only one third of the actual production cost of shows. 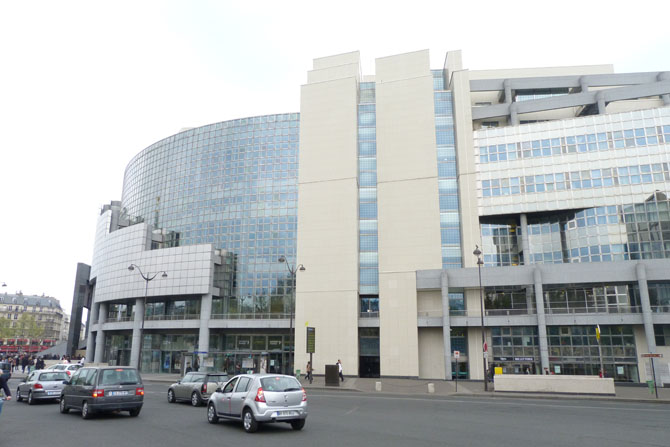