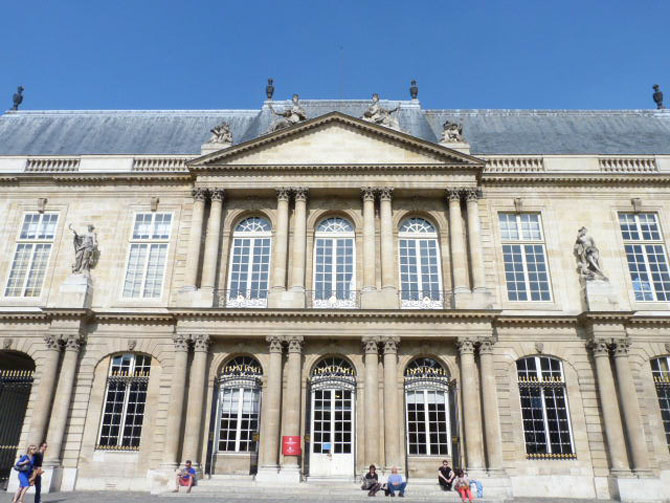 The current rue des Archives is nearly 900 meters long, and runs from rue de Rivoli to rue de Bretagne. It was formed by the merging of several medieval streets except  for its northern section, rue Portefoin to rue de Bretagne, drawn in 1806 on the site of the Children's Hospital Enfants Rouges. This emblematic Marais street is perfect for a pleasant walk to explore the rich architecture of the neighborhood, past, present and future.

Rue des Archives may first evoke the Ville Neuve du Temple, which appeared in the vicinity of the Temple enclosure and which from the 12th century acquired great power due to its financial wealth and land, managing the royal treasury and also serving as a bank for Princes. The Templars benefited from two privileges: the right to asylum and the right to franchise. They notably had the right to harbor fugitives on their premises. The location of the enclosure, today no longer visible, was roughly between the current rue du Temple, rue de Bretagne, and rue Caffarelli.

From the 13th century, the Templars decided to create a new town between the inner  and outer enclosures of Philippe Auguste. The Templars in fact had rights such as that to have their land guarded by serfs, making the land much safer. It is within this context of strong economic development that, starting from 1282, a network of nine 4-yard wide streets (7.80m) began to be created. Eight streets parallel to each other were perpendicular to the central axis currently traced by the rue des Archives.

The section of the rue des Archives traced in approximately 1282 during the Ville Neuve subdivision extended from the rue Portefoin to rue des Francs-Bourgeois.

As you walk along rue des Archives starting from its crossing with rue de Bretagne and heading south towards the Seine, at the corner of number 83/90 and 2 rue Portefoin was a children's hospital called Hôpital des Enfants Rouges which took in orphans under the monarchy. Closed to orphans by Louis XV, it became a hospital for foundlings before being permanently closed and dismantled. The name Enfants Rouges still exists, however, today only as the name of one of the oldest local markets.

At 78 rue des Archives stands the Hotel de Tallard, built by the architect Bullet (1639 to 1716), who also constructed the Arch of Saint Martin. This hotel has an elegant, original staircase and beautiful medallions with images of the four seasons carved in arcade ecoinsons.

At the numbers 72, 74, and 76 rue des Archives, a series of sumptuous hotels were built between 1642 and 1647, including Hotel Le Peletier de Souzy, Hotel Villefix, and Hotel Tallemant. The latter is composed of a main building four bays wide and two floors high, whereas Hotel Villefix was built between a courtyard and garden; it was considerably modified and altered during the 19th century.

At 70 rue des Archives, the Hotel de Montescot has kept its original elevation, which is three levels for the main building, two floors for the south wing as well as its garden. Note particularly the portal with a tympanum pierced by an oculus..

At number 62 is the Hotel Mongelas which was erected in 1705, probably in terms of Jules Hardouin – Mansart. It housed the Murat Jewellers from 1861 to 1965 before becoming the annex of the Hunt Museum in 2002, located in the adjacent building.

At 60 rue des Archives, the Hotel de Guénégaud des Brosses, now the Hunting Museum, was rebuilt from 1651 to 1653 by Francois Mansart. Several commercial firms invested in it starting in the 19th century before finally being bought in 1961 by the city of Paris, who restored it. This is the only Mansart mansion completely preserved still existing in Paris. It is the epitome of the beautiful 17th century.
The hotel consists of a main building between courtyard and garden, 2 wings leading back to the street, and an entrance gate.
The museum now houses fine paintings by masters such as Desportes, Oudry and Chardin on the theme of hunting as well as a fine collection of preserved animals.

Note the neo-classical fountain at the corner of 53 rue des Archives and rue des Haudriettes representative of the style of the period around 1765), which is decorated with a nymph.

At the corner of 49 rue des Archives and rue Braque was the Hotel Navonne, destroyed in 1925 to build a factory for electrical distribution.

The Hotel de Clisson, then becoming de Guise, is the oldest houses of the quadrilateral. Its fortified gate, still visible today, is a unique example of private architecture in 14th century Paris. 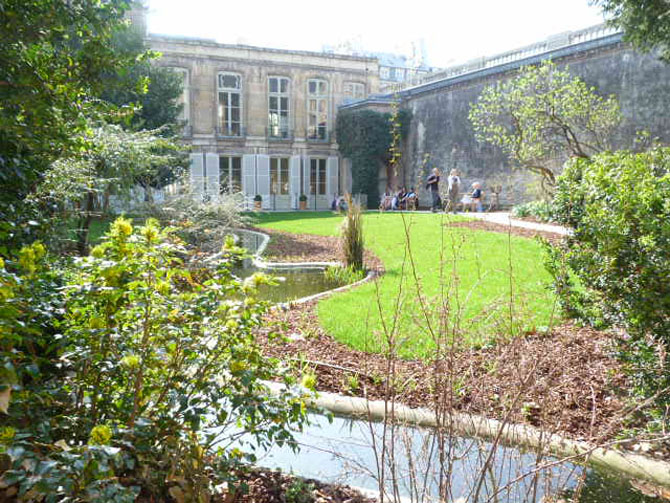 The Hotel de Soubise, with a huge courtyard, modeled on that of the Hotel du Grand Prieur du Temple, ends in a semicircular form. The Hotel de Soubise and the Hotel de Rohan were seized after the emigration of the Princess of Guemenee, daughter of Marshal de Soubise. In July 1789, the Assembly was concerned with the preservation of its records; in September 1790 this construction began to be officially known as the national archives. Today it is possible to visit the apartments of the Princess Guemenée, a French aristocrat who lived there during the second half of the 18th century, which is a masterpiece of Boffrand and Natoire. 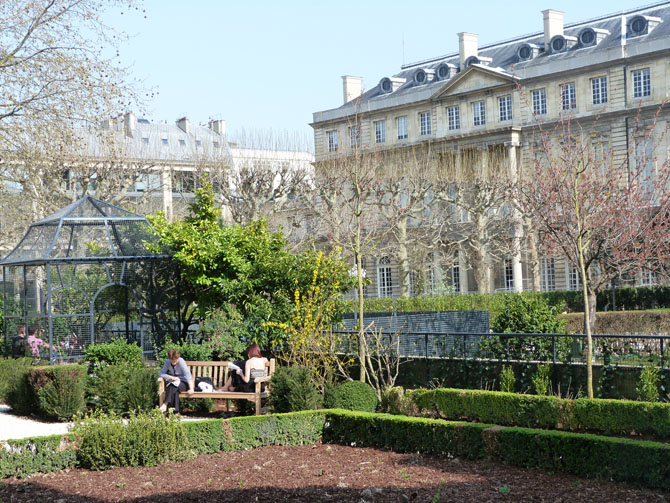 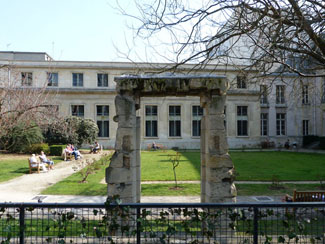 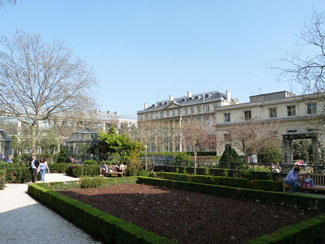 Continuing your walk on rue des Archives towards the Seine river, you will pass a place dear to French literature as number 25-27 was the residence of Victor Hugo's famous hero Jean Valjean of "Miserables". (If you have time, visit the nearby Maison de Victor Hugo on Place des Vosges, which is now a museum of the City of Paris; entry is free).

On another note, at 34 rue des Archives is the "building workshop" of Renzo Piano who was one of the architects of the Centre Georges Pompidou, a stone's throw away.

Since the late 20th century, the immediate area surrounding rue des Archives, rue Vieille du Temple, and rue Sainte Croix de la Bretonnerie has been the center of this openly and predominantly gay neighborhood. The first gay bar opened here in 1968 in rue du Plâtre. The Open Café, at the corner of rue des Archives and rue Sainte Croix de la Bretonnerie, is a must for anyone who wants to start the evening with a drink in a friendly atmosphere. The nearby SPYCE bar is also worth a visit. 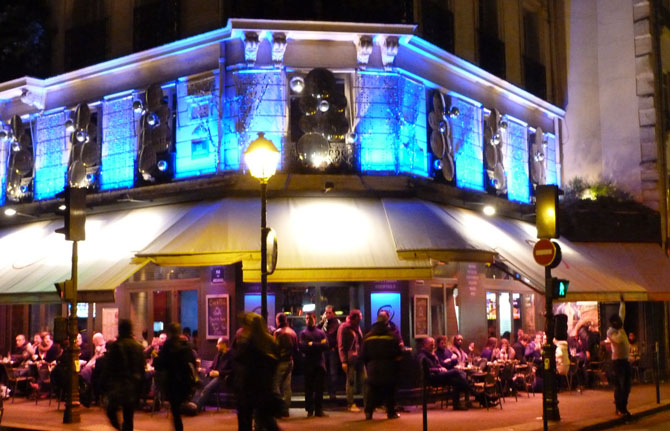 At 20 - 24 rue des Archives is the Billette church, whose flamboyant cloister, dating from 1427, is an interesting example of medieval Parisian architecture. 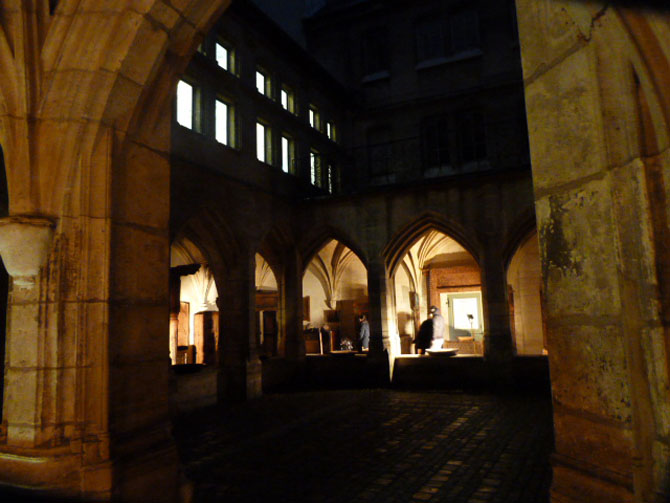 Finally, at the corner of rue des Archives and rue de Rivoli, opposite the City Hall (Hotel de Ville), stands one of the favorite Parisian department stores, BHV. Its founding family, Cognacq – Jay, bequeathed a fabulous 18th century art collection visible today in the Musée Cognac-Jay, located on rue Elzevir in the Marais.

A report by : Arnaud Sellier © parismarais.com 2012
the marais map