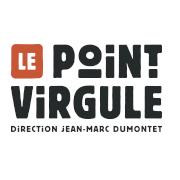 Rating Théâtre du Point-Virgule / No rating
Add a comment (The following spaces are just for your comments after your visit, no answer will be returned to you)