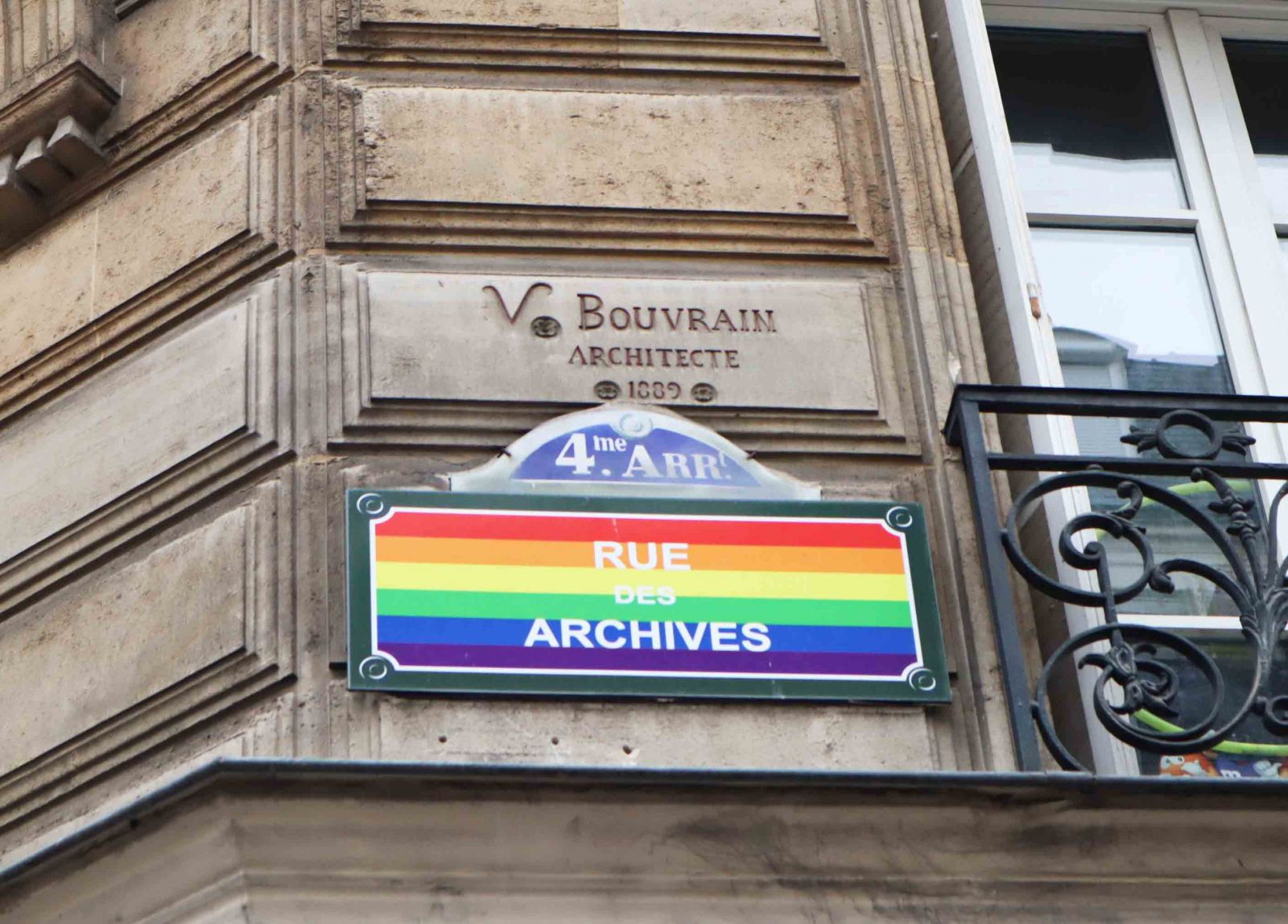 Since 2018, when the city of Paris hosted the Gay Games, and the municipality supported this sporty and festive operation, the streets of the Marais district display rainbow flags everywhere. Street signs also display the colors of the gay flag and crosswalks have been transformed into rainbow crossings, only in some streets and near historical LGBT places, well those that have survived, because they are, as in all Western capitals, less and less numerous. Sign of recognition for some or pure washing and commercial recovery for others... They have the merit of indicating that you are in a gay-friendly territory, and that's reassuring! 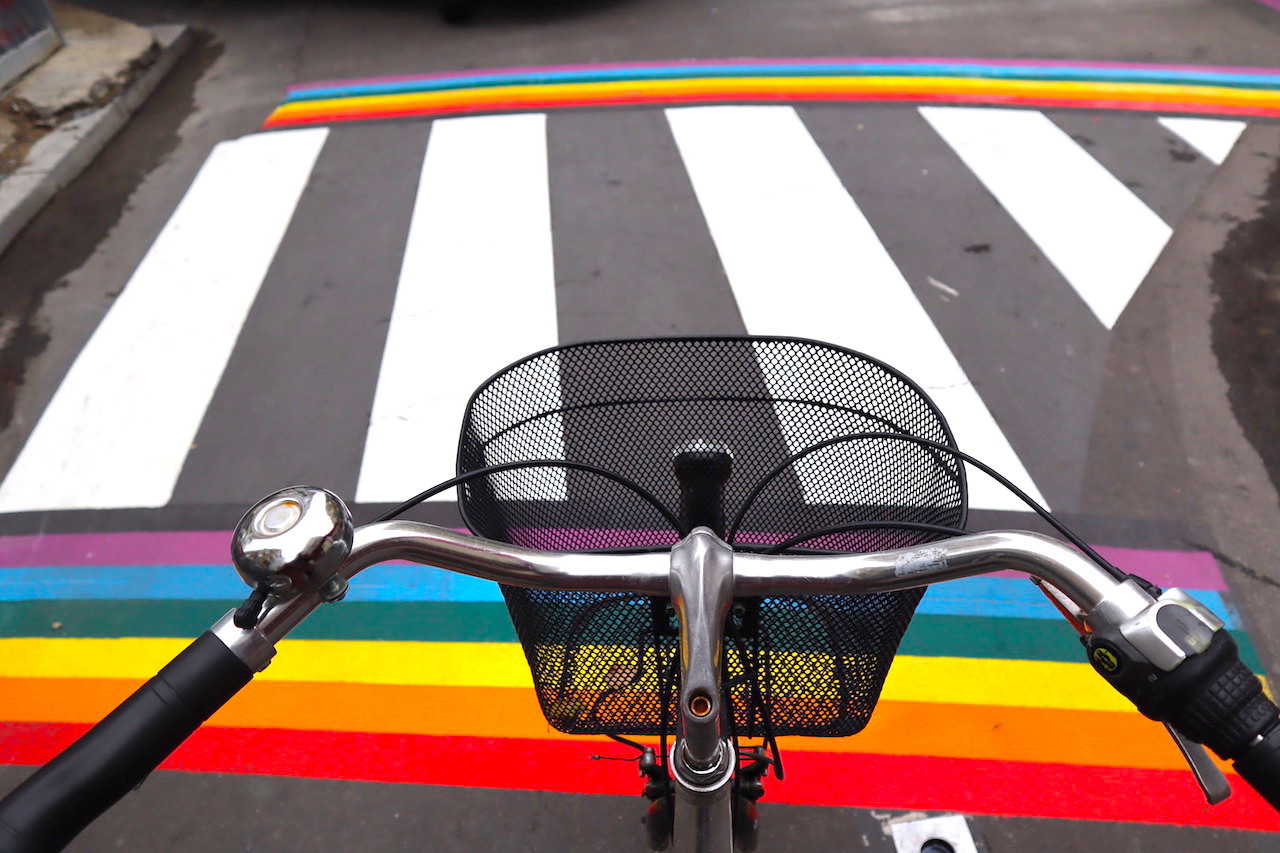 9 AM. The best way to get around the Marais, if not on foot, is by bike. You can rent a bike by the day or by the week at Paris Bike Tour or use Velib, the municipal system, or the free-floating rental companies. Don't park just anywhere, respect the red lights and use the spaces dedicated to this use. Paris is not yet Amsterdam and Parisians are not very careful with cyclists! 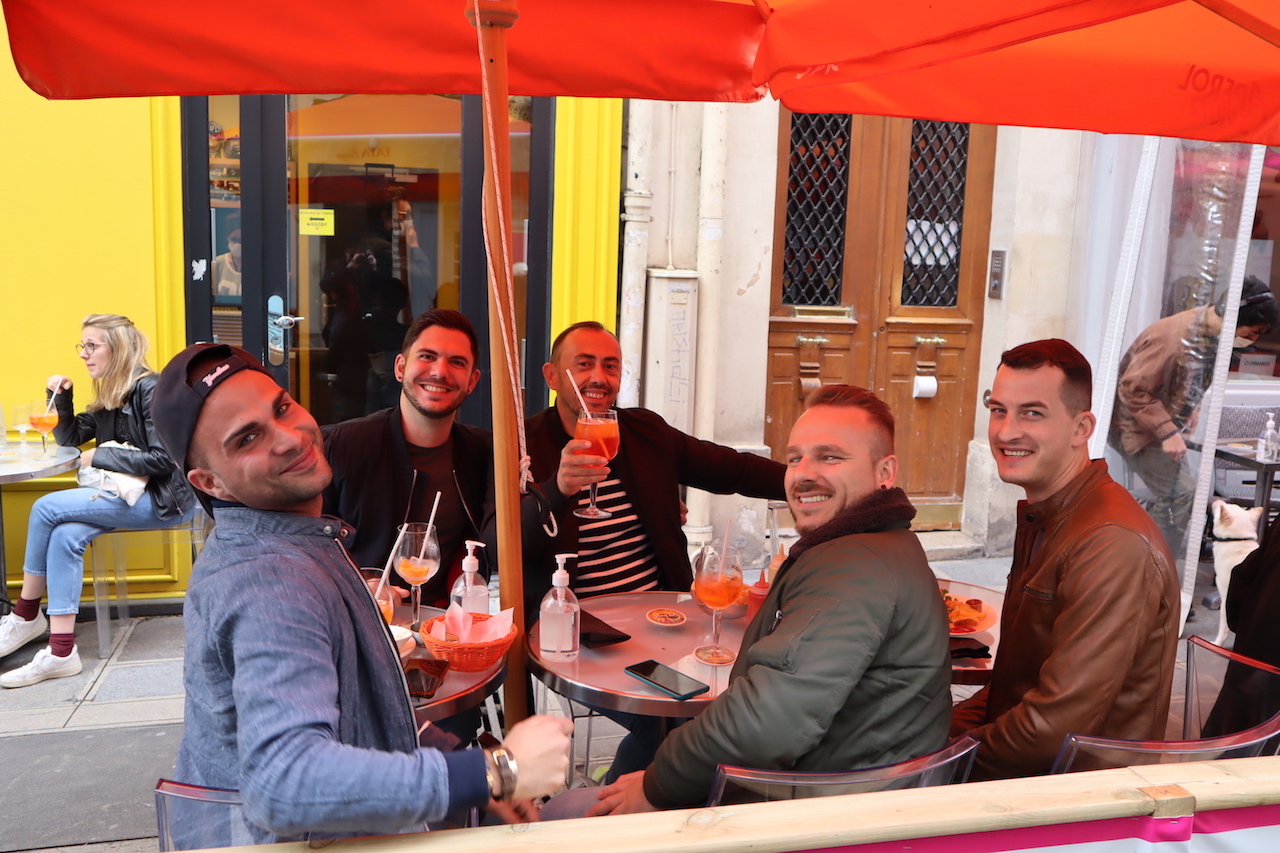 11 AM. In Paris, there is no time for the Aperitif on the terrace, at any time of the day and evening. Between April and November, summer terrace extensions are granted to bars and restaurants that play the game. Rue Sainte Croix de la Bretonnerie, Tata Burger's Terrace is a delight for Spritz lovers from all over the world. 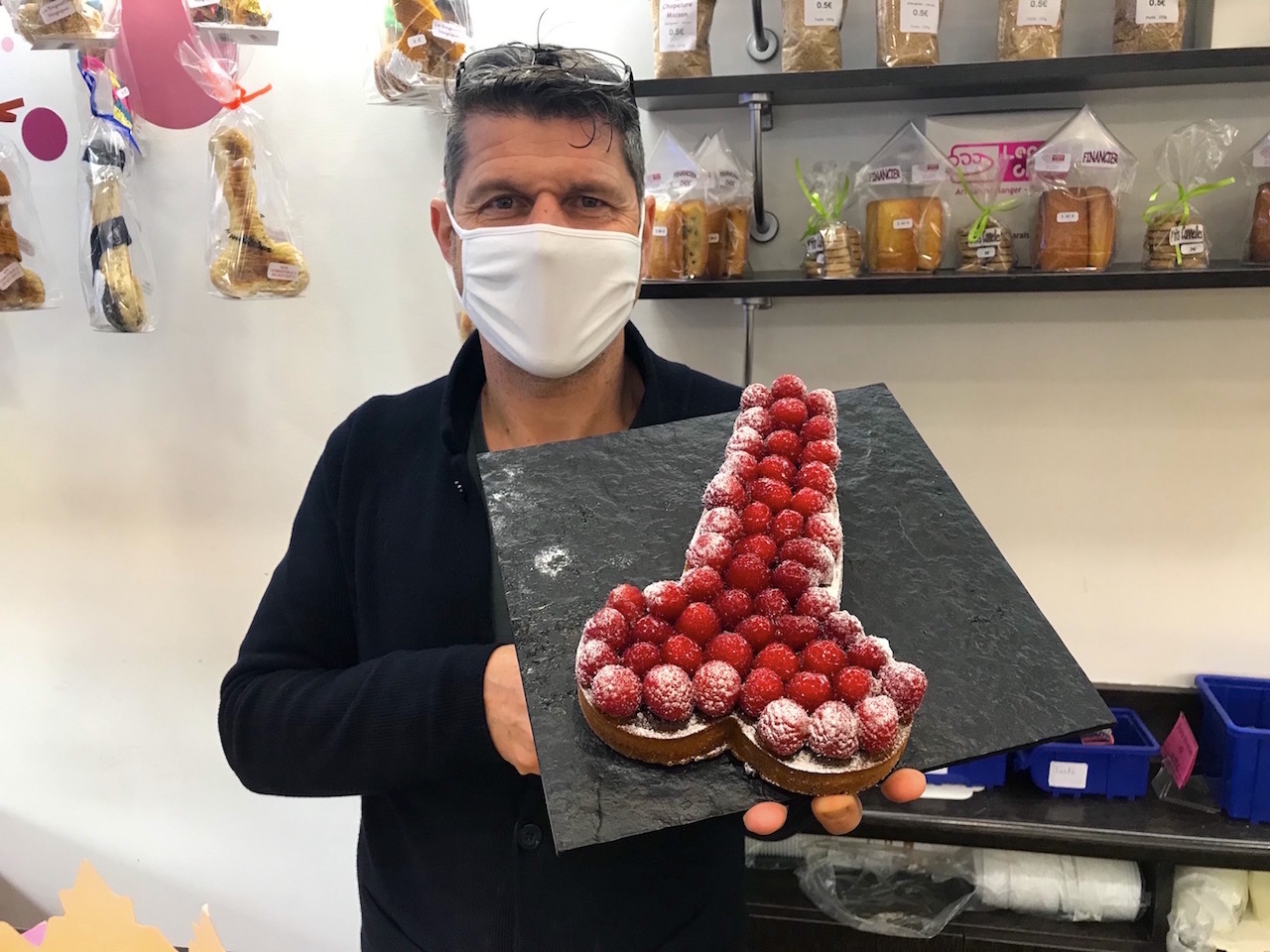 12 PM. The Legay Choc pastry shop is a must, as it makes pies and cakes so funny that they are known all over the world. Richard Legay, that's really his name, practices his profession of baker in the Marais with passion. You can ask him for all the pastry extravagances on the menu. At least, leave with a Magic Wand in the shape of a dick and bite into it in public in the rue Rambuteau. 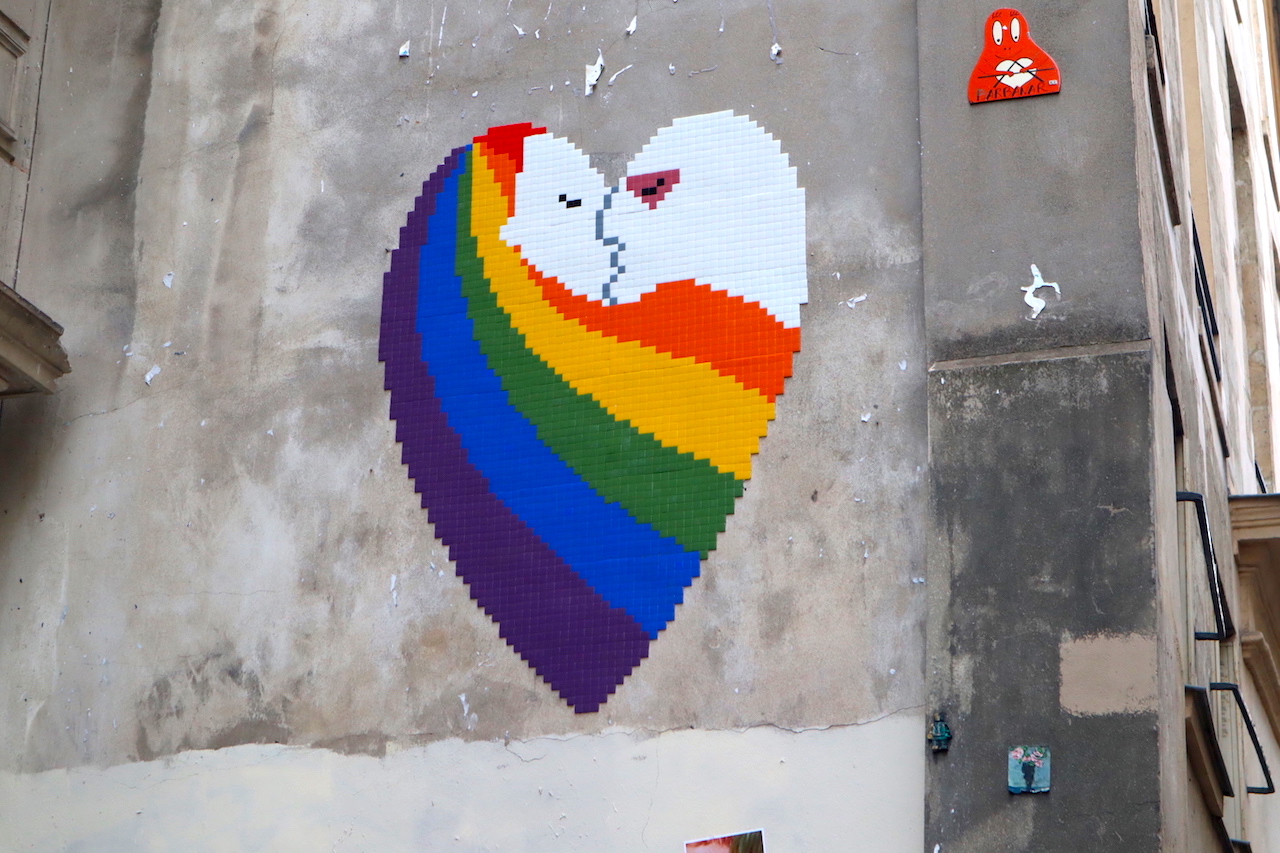 At any time, look up, the Marais is the district of street artists who with more or less talent display themselves in glued paper or glass paste mosaics. Only the most emblematic ones last a long time and are not removed by the cleaning services of the City of Paris... It is necessary to know that the posting or the wild creation of street art is completely prohibited in the classified and safeguarded sector of the Marais. This work is located on rue du Plâtre. 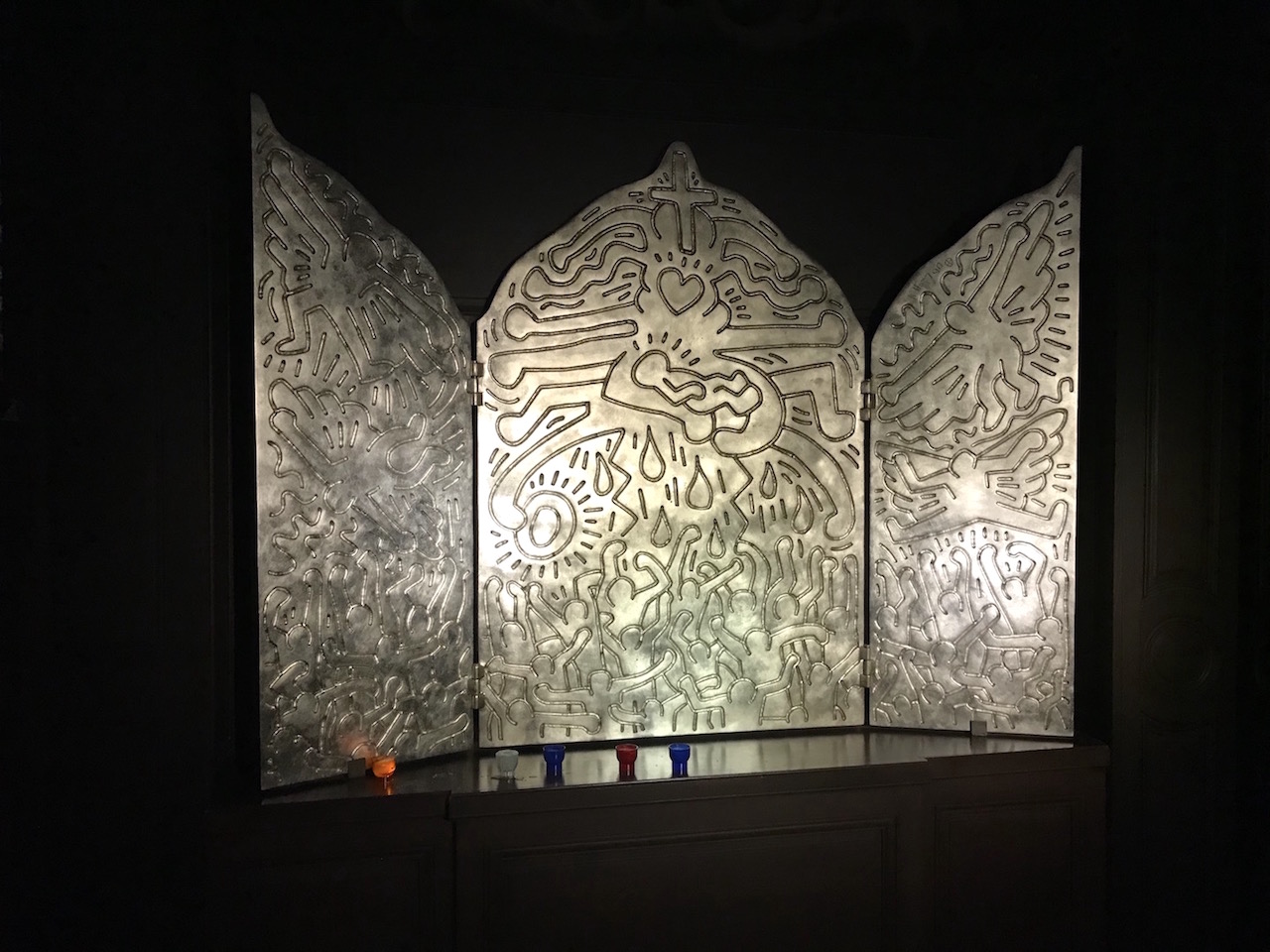 1 PM. Push the doors of the Saint Eustache Church, in Les Halles, east of the Marais. It is the largest church in Paris by its surface. The Saint Eustache parish was the first in the 1980s to support and protect AIDS patients. It houses treasures of classical painting and hosts a magnificent triptych by the American artist Keith Haring called The Life of Christ. 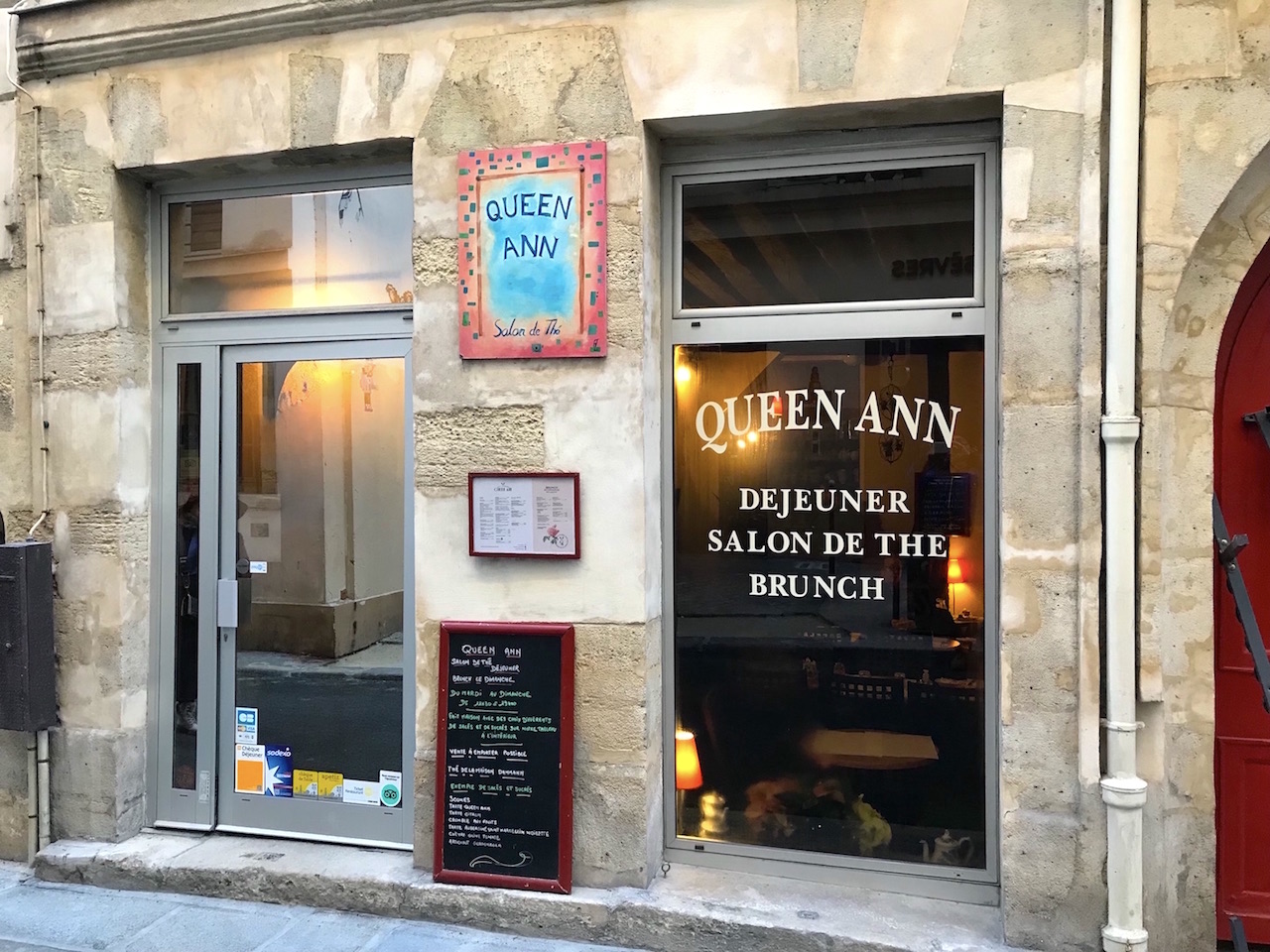 2 PM, for coffee or tea time, go down the steps of this tea room like no other. Queen Ann is timeless, provincial and gourmet, it's the perfect place to take your auntie or your friends for a snack in one of the narrowest streets of the Marais: rue Simon le Franc. Sweet and salty gourmet pies and one of the best old fashioned hot chocolates to treat yourself at a reasonable price. 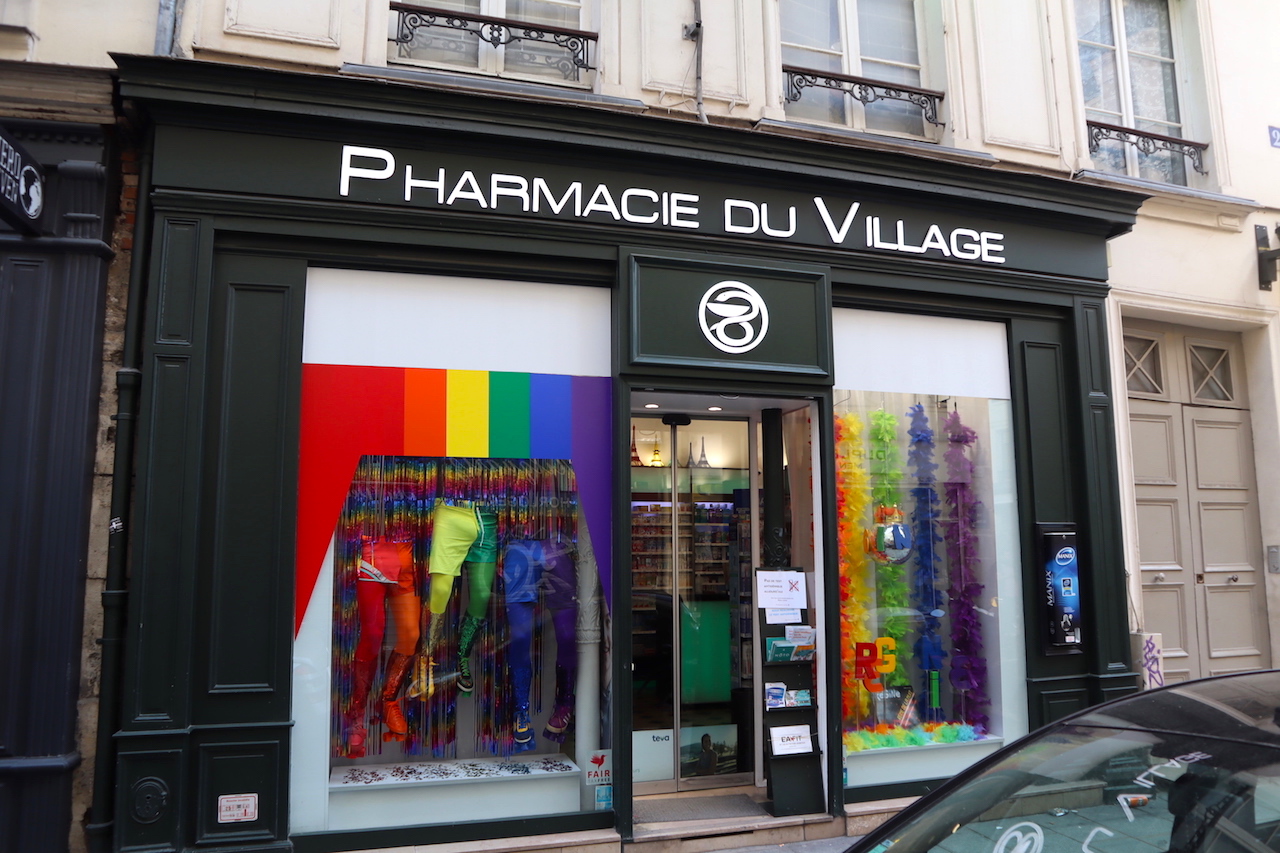 At any time, the historic La Pharmacie du Village located at the bottom of the rue du Temple will help you with all the classic pharmacy and also the most complex treatments needed by travelers. They speak perfect English and will inform you about anything that might be useful for your health during your stay in Paris. 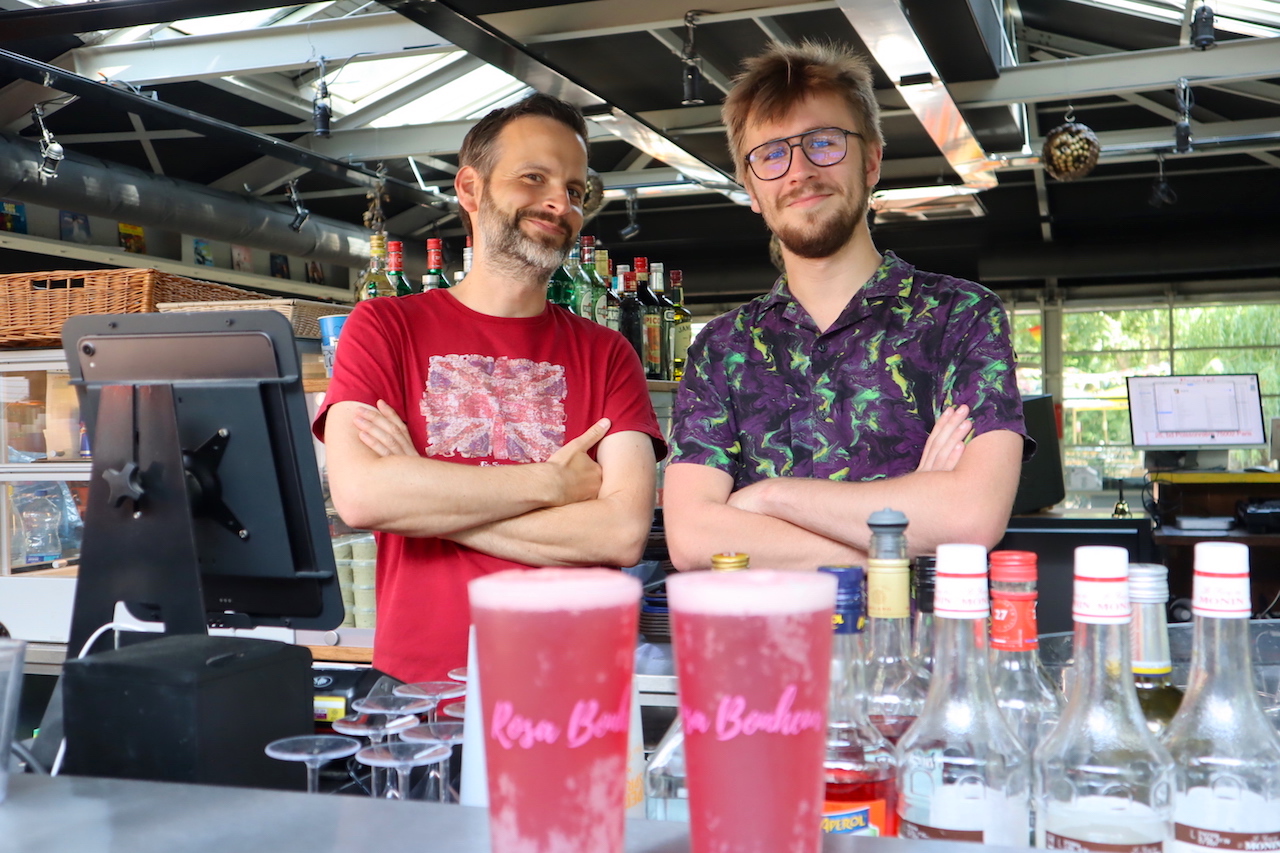 4 PM. If you want to enjoy pleasant outdoor spaces and feel comfortable in mixed and LGBT friendly places, you will find your happiness at Rosa Bonheur which has three Parisian addresses: one on a boat on the Seine, one in the Bois de Vincennes and the first of all, established for 15 years in the Buttes Chaumont park. The most popular and recommended day is Sunday afternoon for each of these addresses www.rosabonheur.fr/rosabonheur 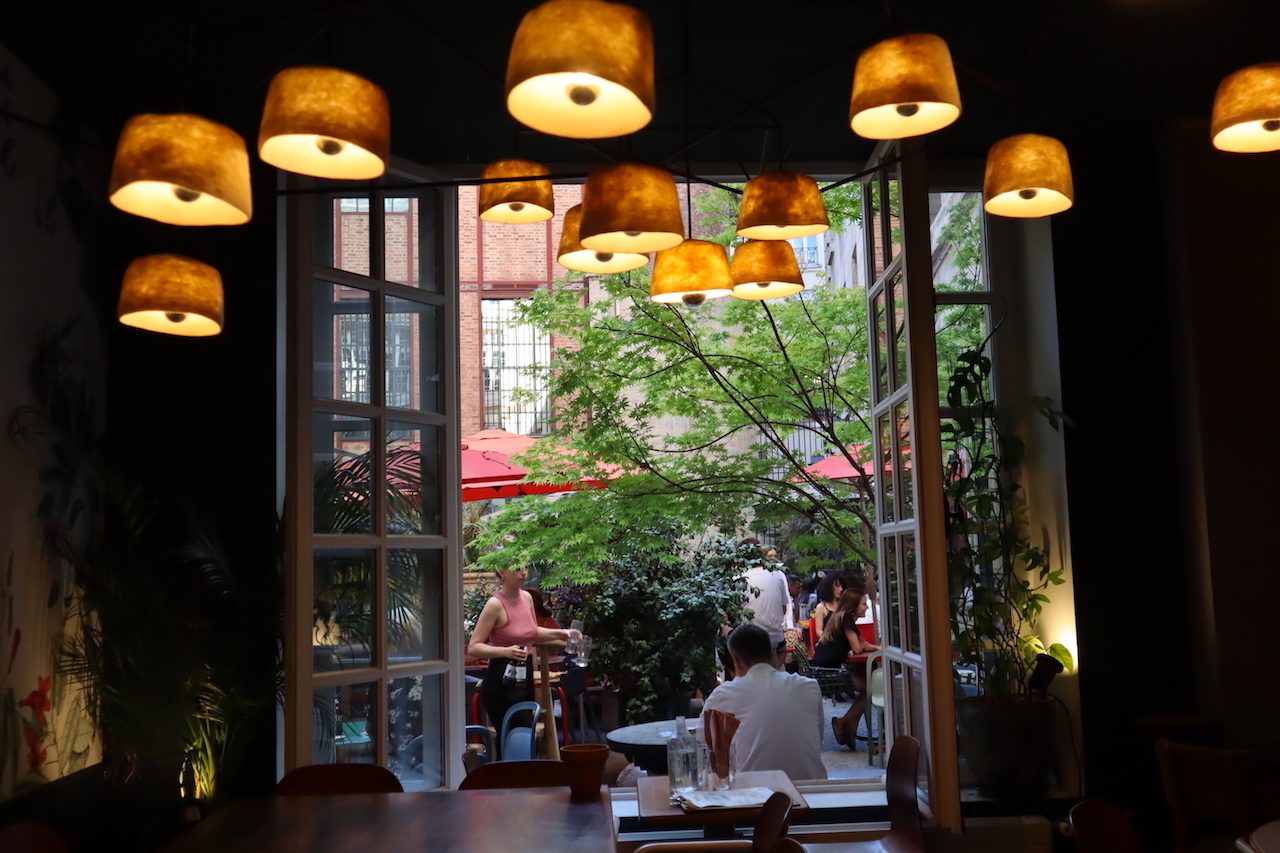 5 pm, pastries, iced tea or small local beers made in Paris? Go to rue des Francs-Bourgeois: a nice alternative with Le Griffon and its flea market decor and its large historic courtyard. The place is open air, the waiters and waitresses are charming, and you will find there all year long the very useful map of the Marais to navigate in the historical center. www.parismarais.com/fr/restaurants-et-sorties/restaurants-coup-de-coeur/griffon.html 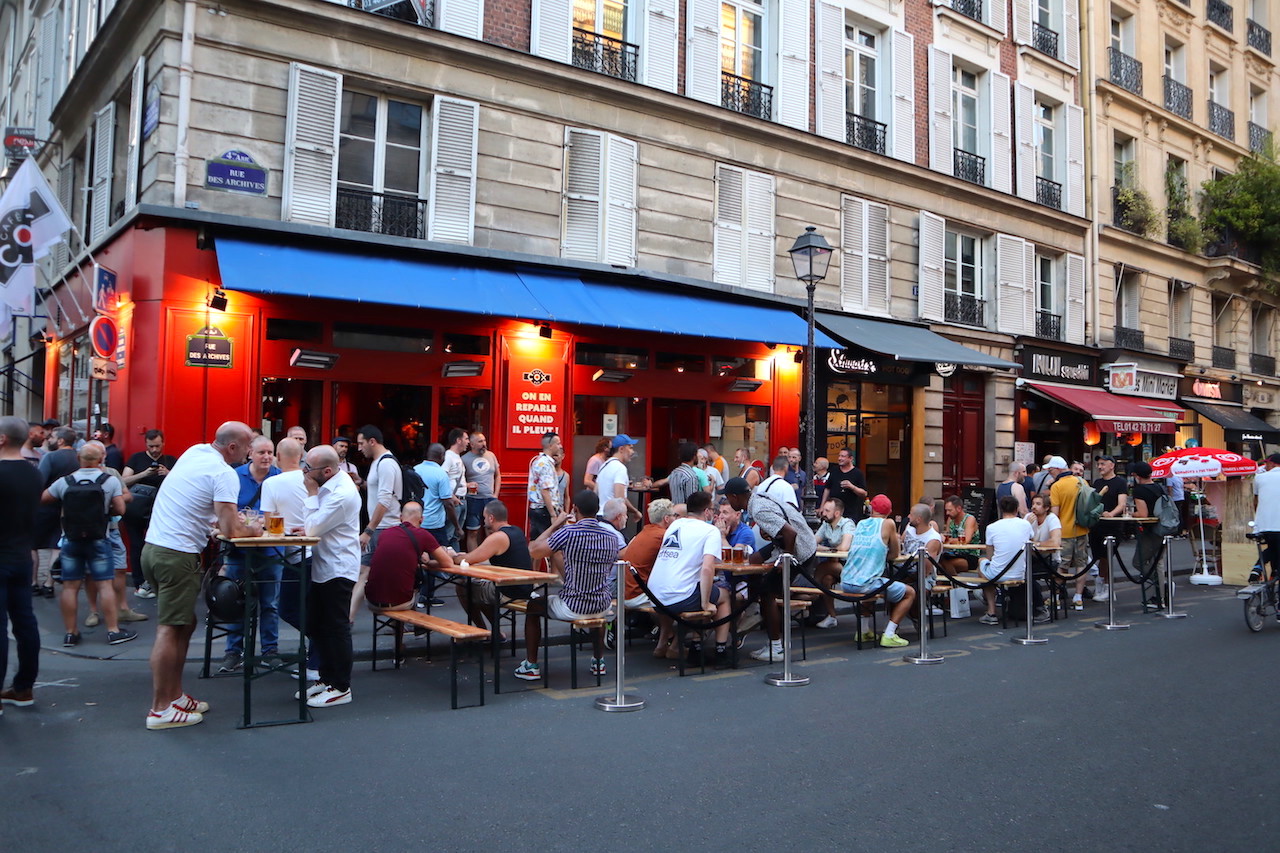 7 pm. Happy hours everywhere and in particular in the rue des Archives in the many bars like the Cox established here since almost 25 years. The Open Café has closed its doors but the Cox is still the meeting point of a clientele of forty-somethings and more. It is the hot spot and meeting point for tourists from all over the world. Just across the street you will also find the very nice Café Cactus with a small terrace and art exhibitions. 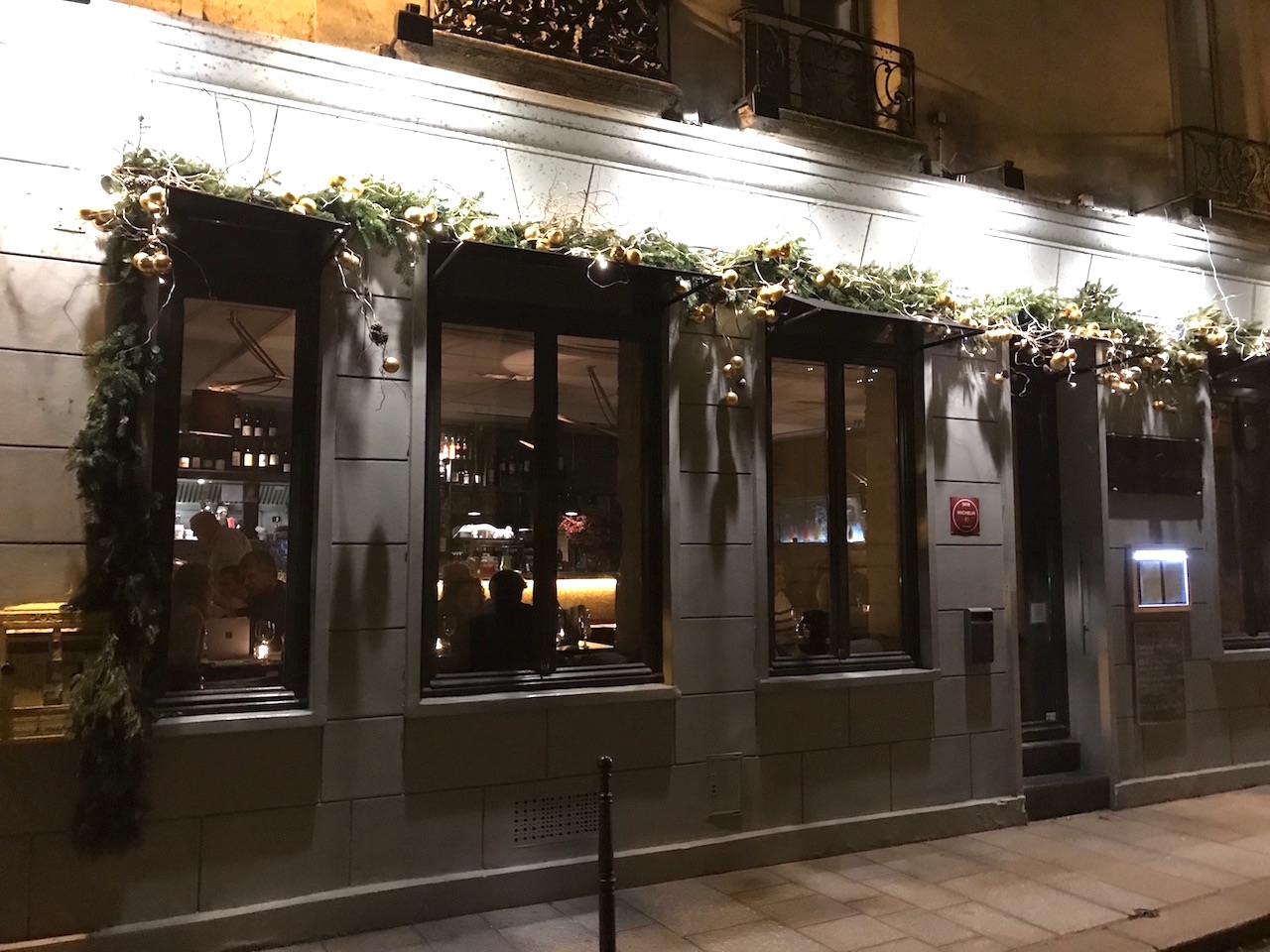 9 pm. We dine chic at Des Gars dans la Cuisine in the rue Vieille du Temple. The first bistronomic restaurant in the neighborhood where you'll have to make reservations. Jean Jacques Delaval and Gil Rosinha, the creators of the place will amaze you with their talent. Try our selection of gay-friendly restaurants in the Marais: www.parismarais.com/fr/styles-de-vie-du-marais/le-quartier-gay-du-marais/restaurants-gay-friendly-a-paris 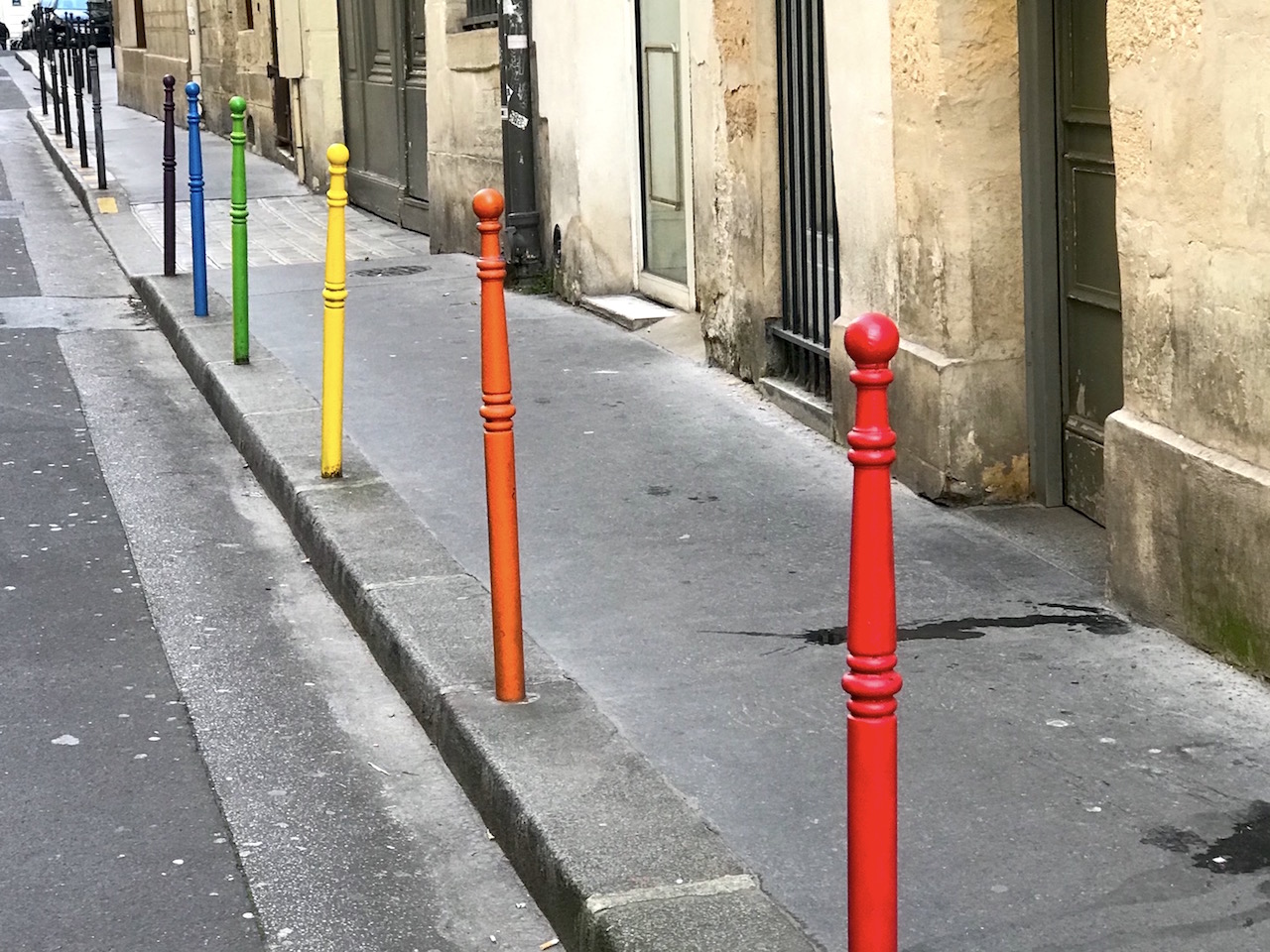 Parisian street poles are also recovered for local signage near gay establishments. It's a way to find your way... Sometimes the bars disappear and the poles remain colored. This is the case here, rue du Plâtre where the bar La Mine closed its doors during the covid health crisis in 2021. 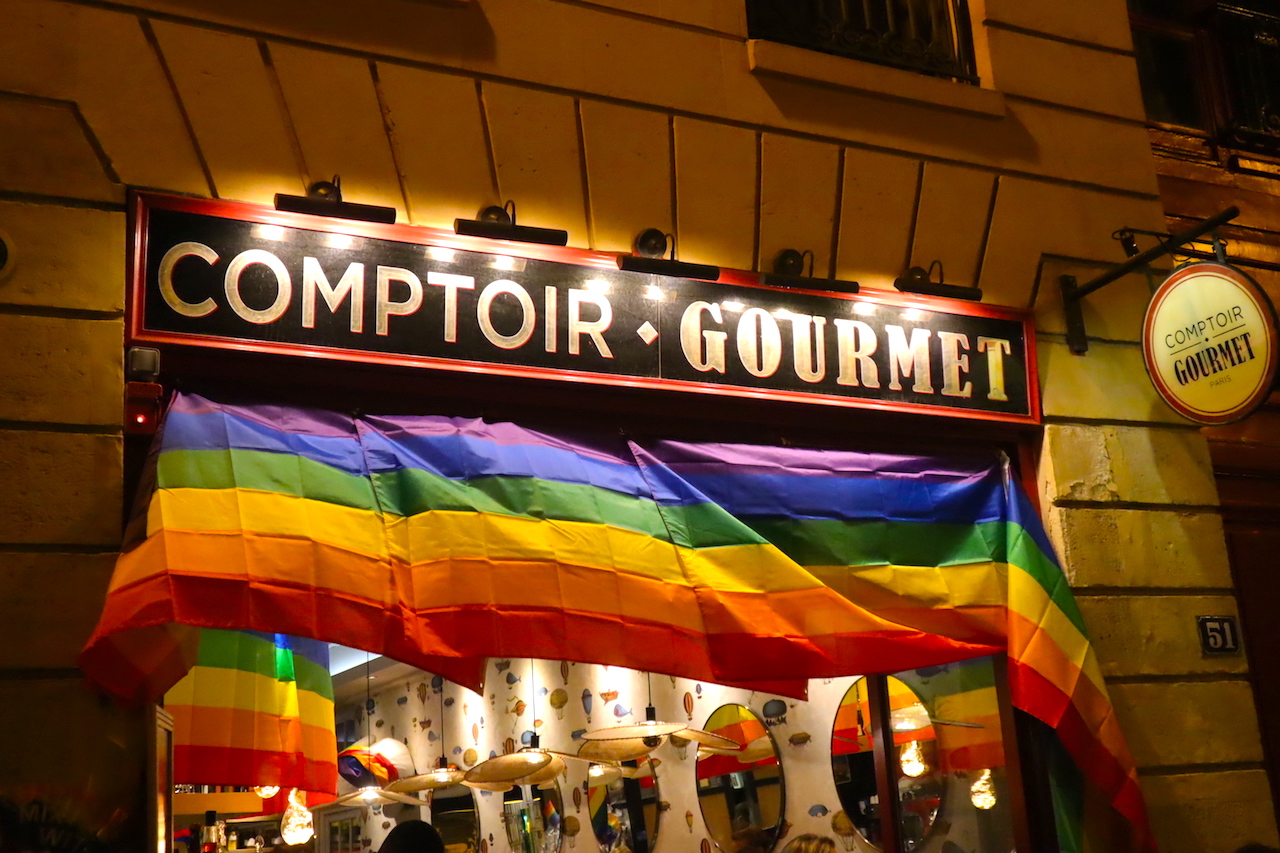 10 pm. Dine Italian on the go at Comptoir Gourmet in the lower part of rue du Temple, at the bar but also in the little secret room at the back of the restaurant. 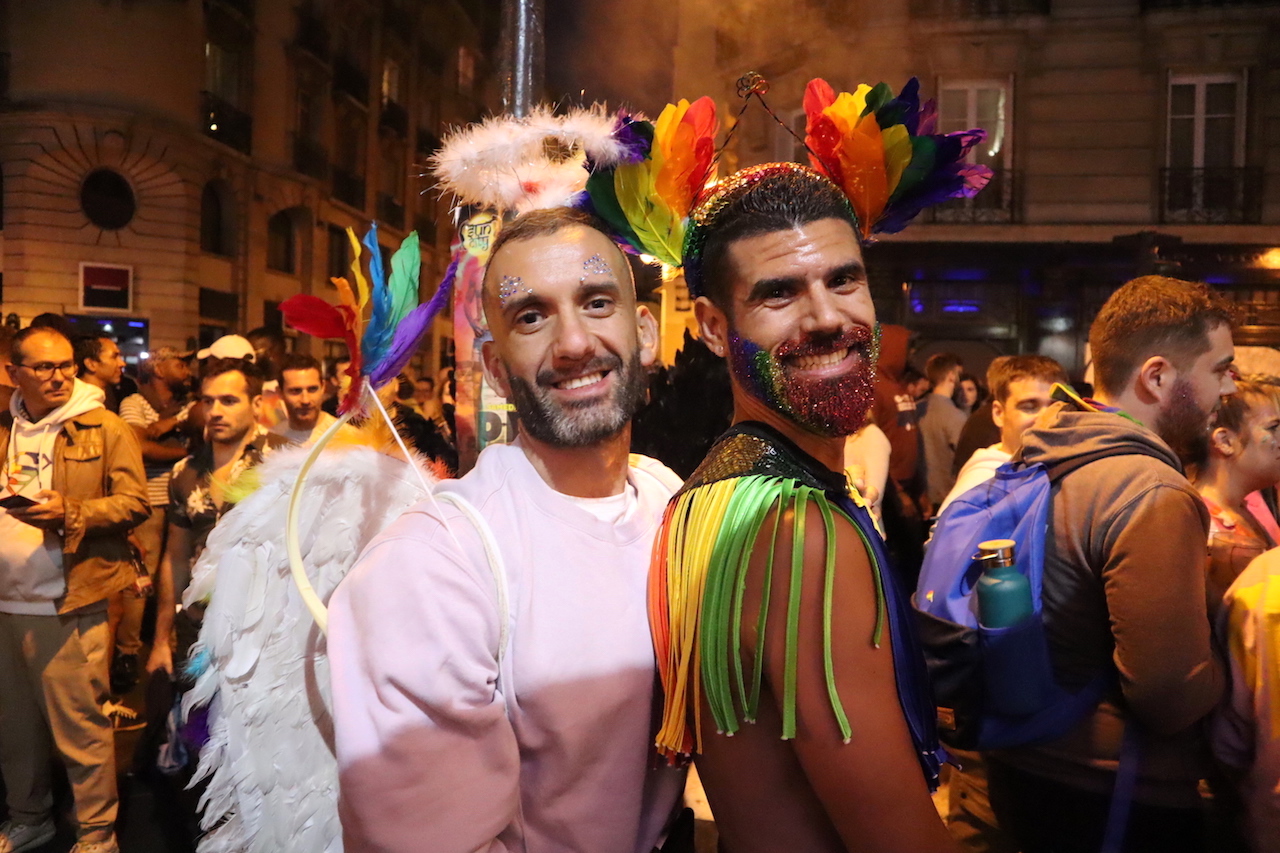 11 pm. The baroque angels that you will find in the churches of the Marais are sometimes reincarnated on summer evenings in June during Gay Pride nights. Here in 2022 on June 25th, the night of the closing of the mythical Open Café. Quite a symbol. 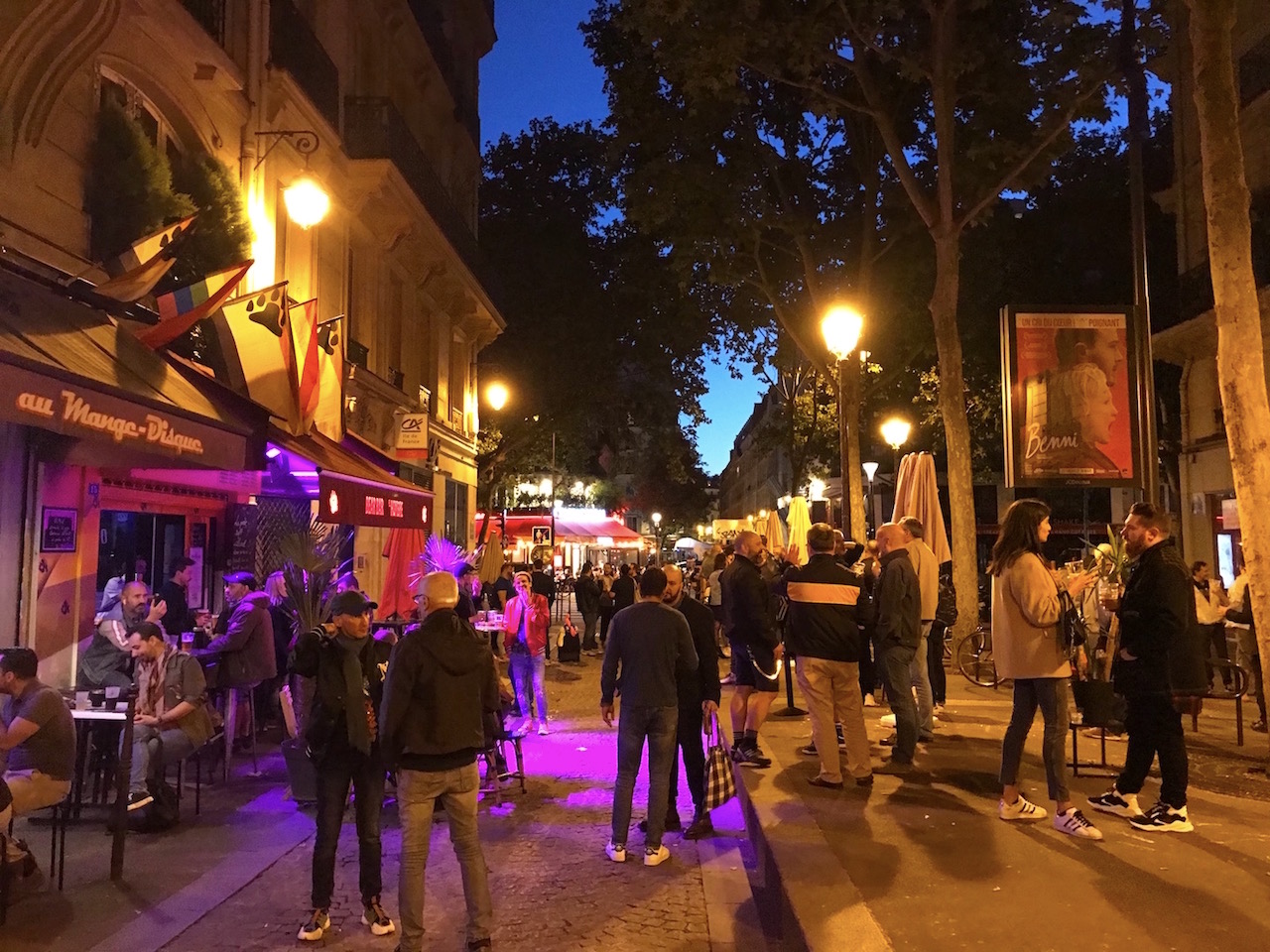 In front of Le Mange Disque and El Hombre, Rue de la Reynie, a summer evening like any other! 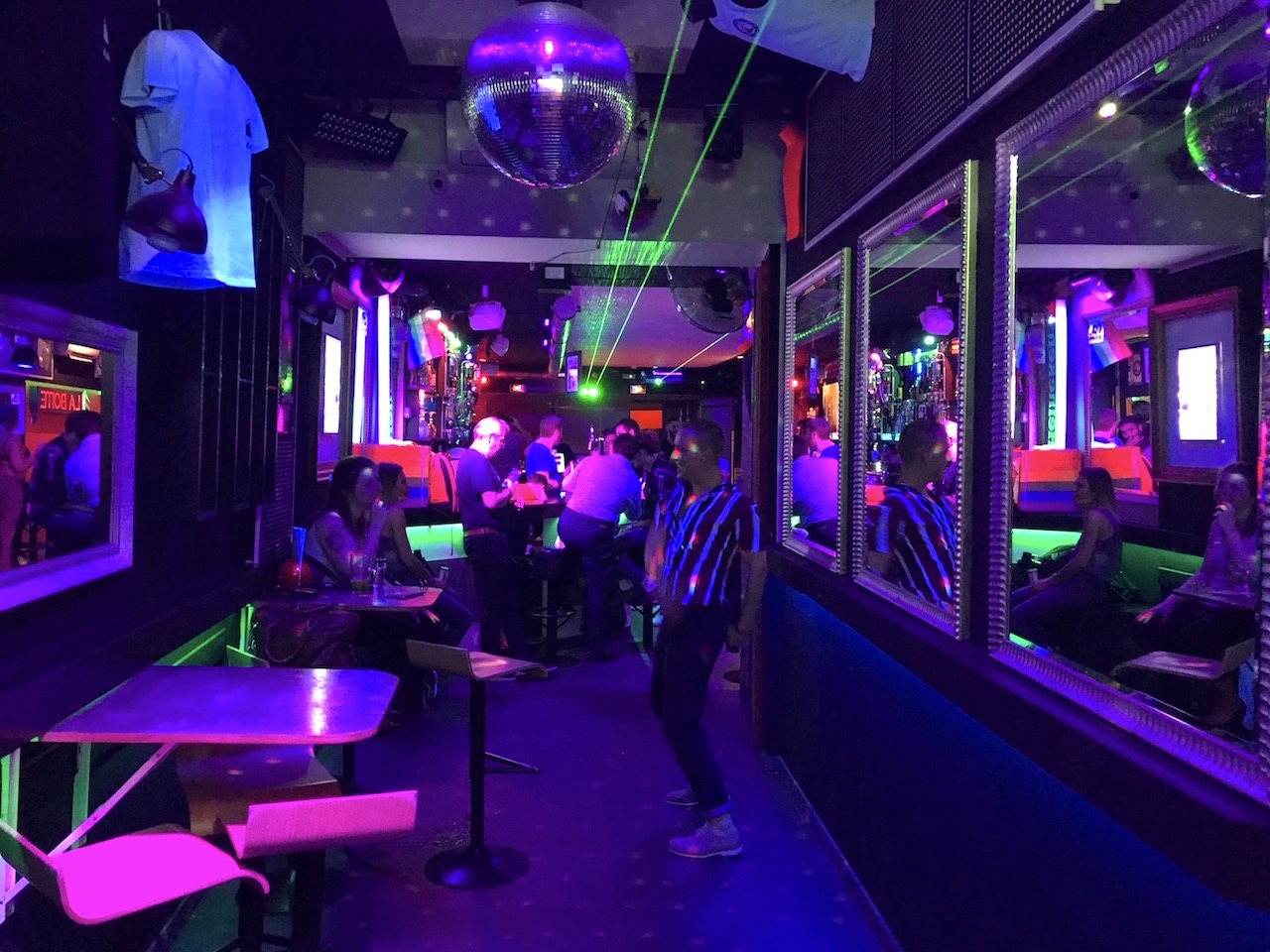 La Boite, an institution until 6 o'clock in the morning in the rue des Lombards. A party atmosphere "like in  80's", spacious and well kept toilets, it's so rare, and a big surprise in the smoking room... 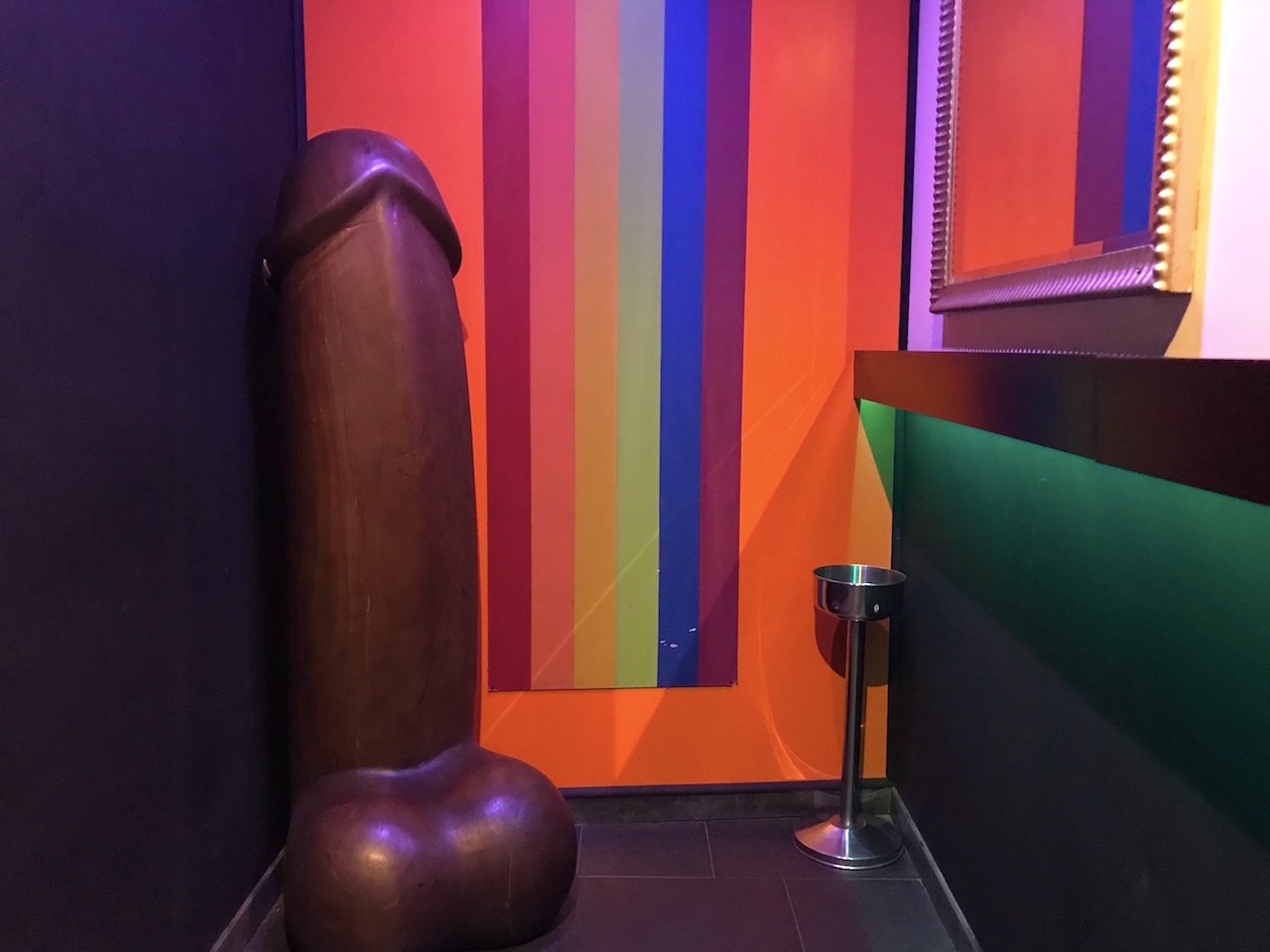 No, it's not made of chocolate, but yes, it's the biggest and tallest, carved in a tree trunk. 1,80 meter, no less. It is in the smoking room of the night bar La Boite. Pride of Carlos, owner of the establishment who ordered it. Passage obliged for a photo souvenir, out of standards and unforgettable. Rue des Lombards 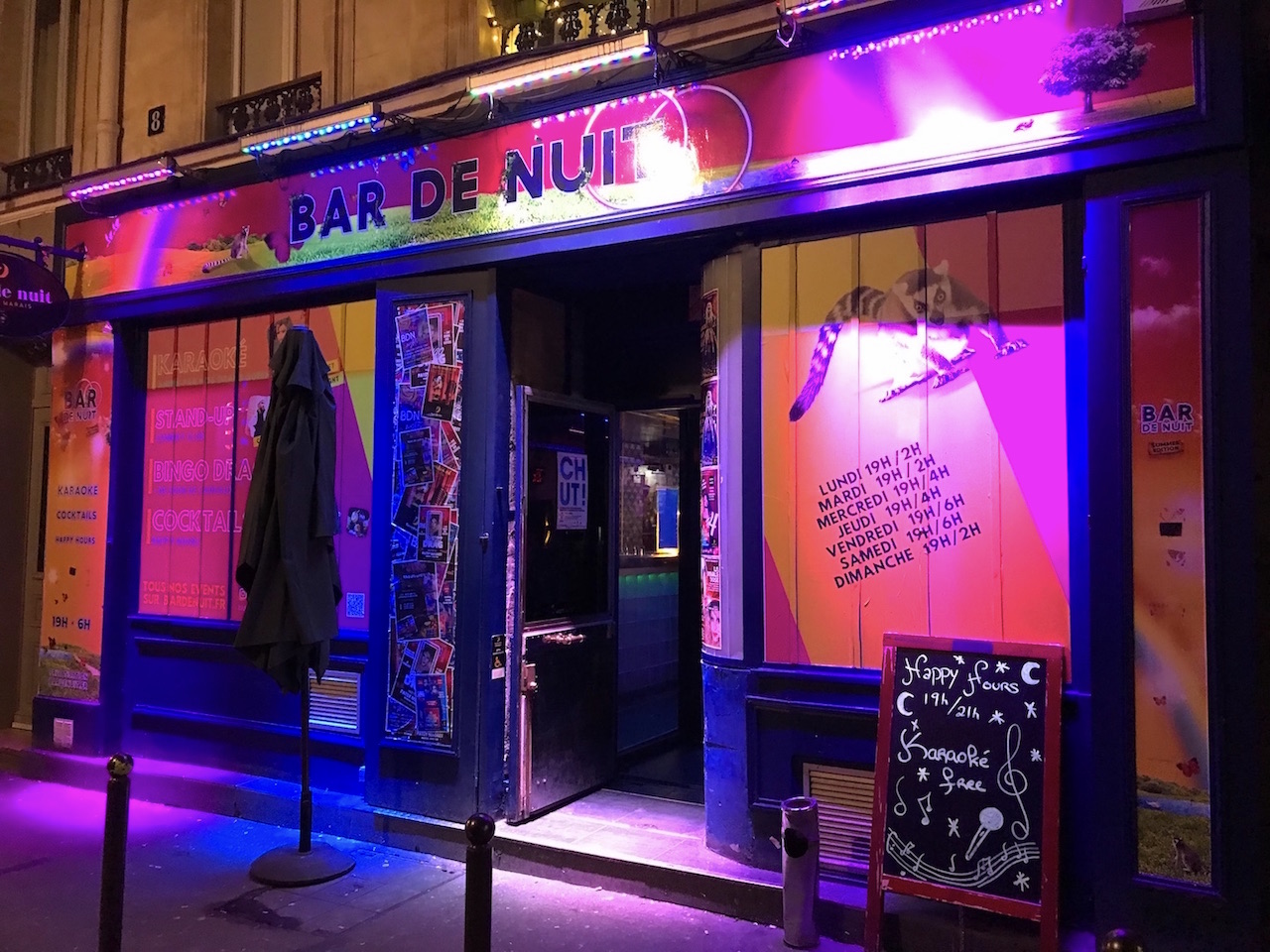 Paris is the capital of comedy, the Marais district of cafe theaters and small cabarets. Don't miss the Point Virgule and other theaters to see the new talents of French-speaking gay humor. Here the sparkling Denise during the tour of the comedians of Absolutely Hilarious. All theaters in the Marais : www.parismarais.com/fr/restaurants-et-sorties/theatre-et-cinema 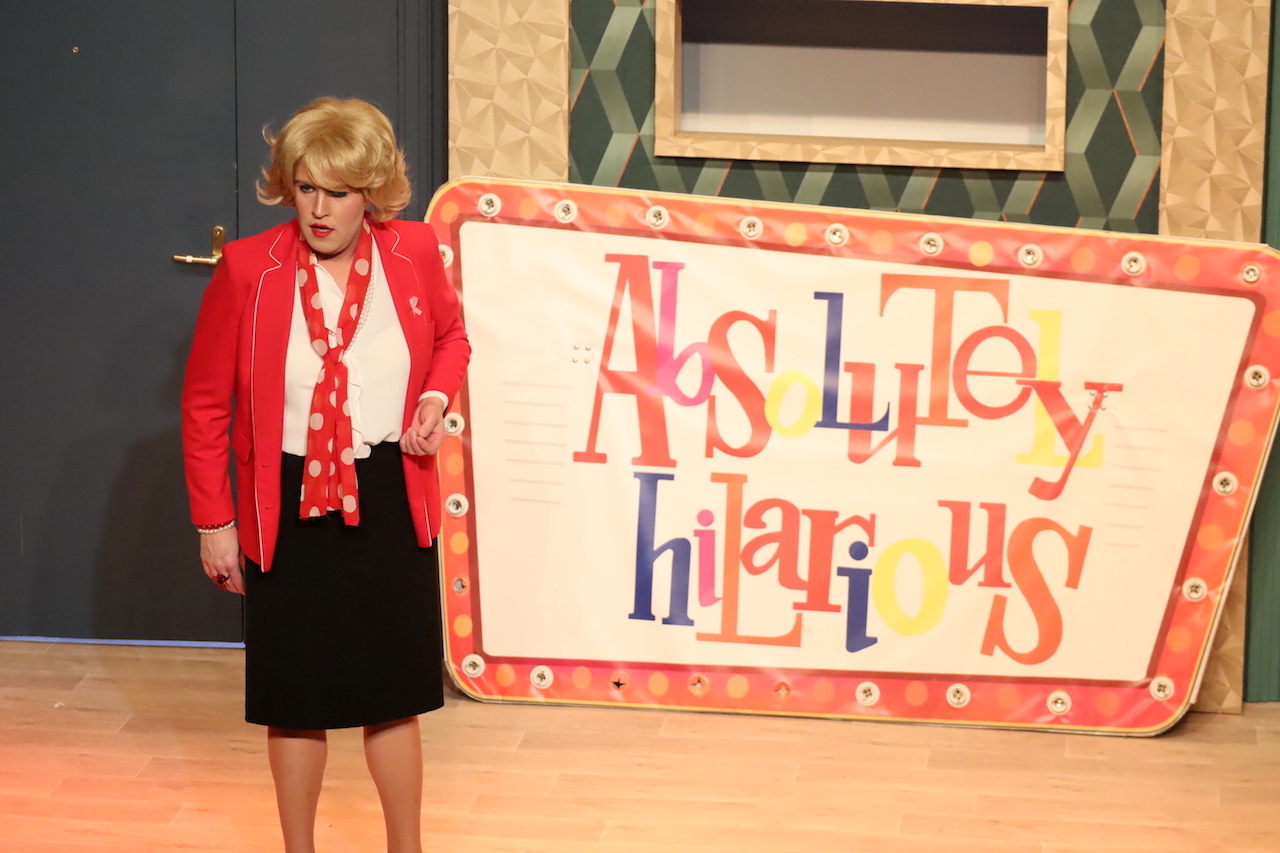 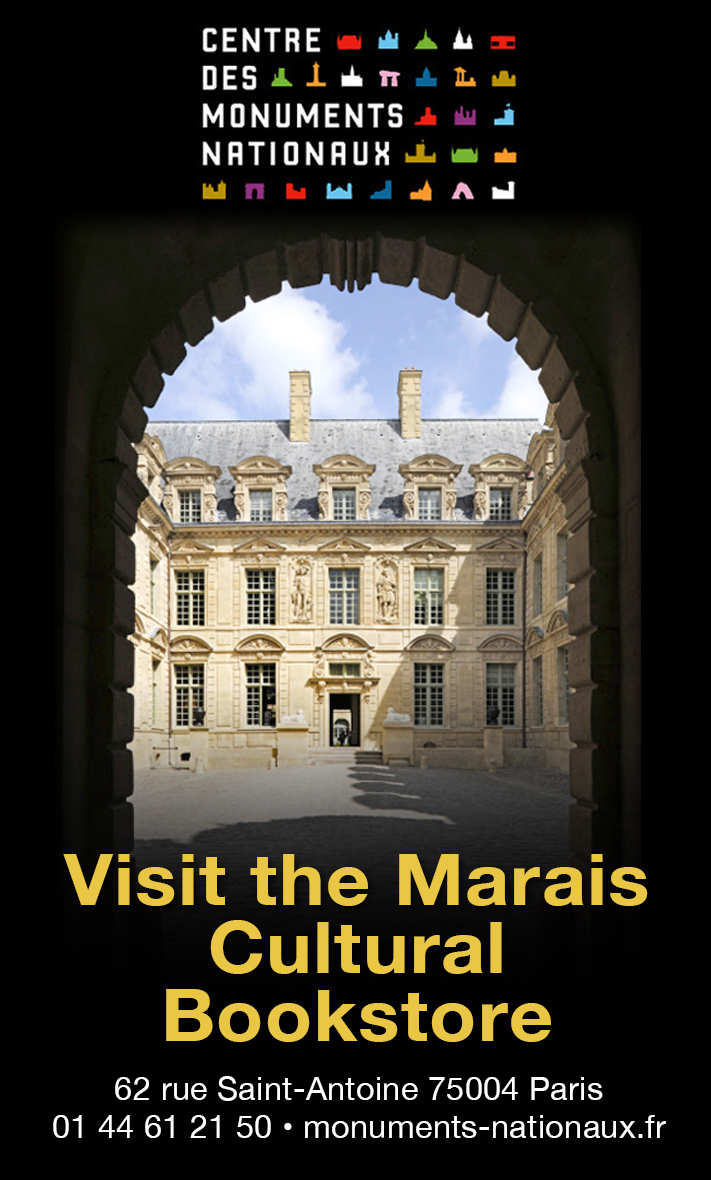