Panorama of the synagogues of the Marais

Since the 13th century, the Marais has been home to the most famous Jewish district in Paris. Located in the 4th arrondissement, many Jewish families came to settle in the area around Place Saint-Paul. It is notably at the end of the 19th century and until the Second World War, that the Pletzl (small square in Yiddish), welcomes tens of thousands of Jews from Eastern Europe, fleeing persecution. Food shops, bookstores, typical stores and synagogues create a small "shteti" atmosphere in the heart of the capital, a place not to be missed in the Marais. 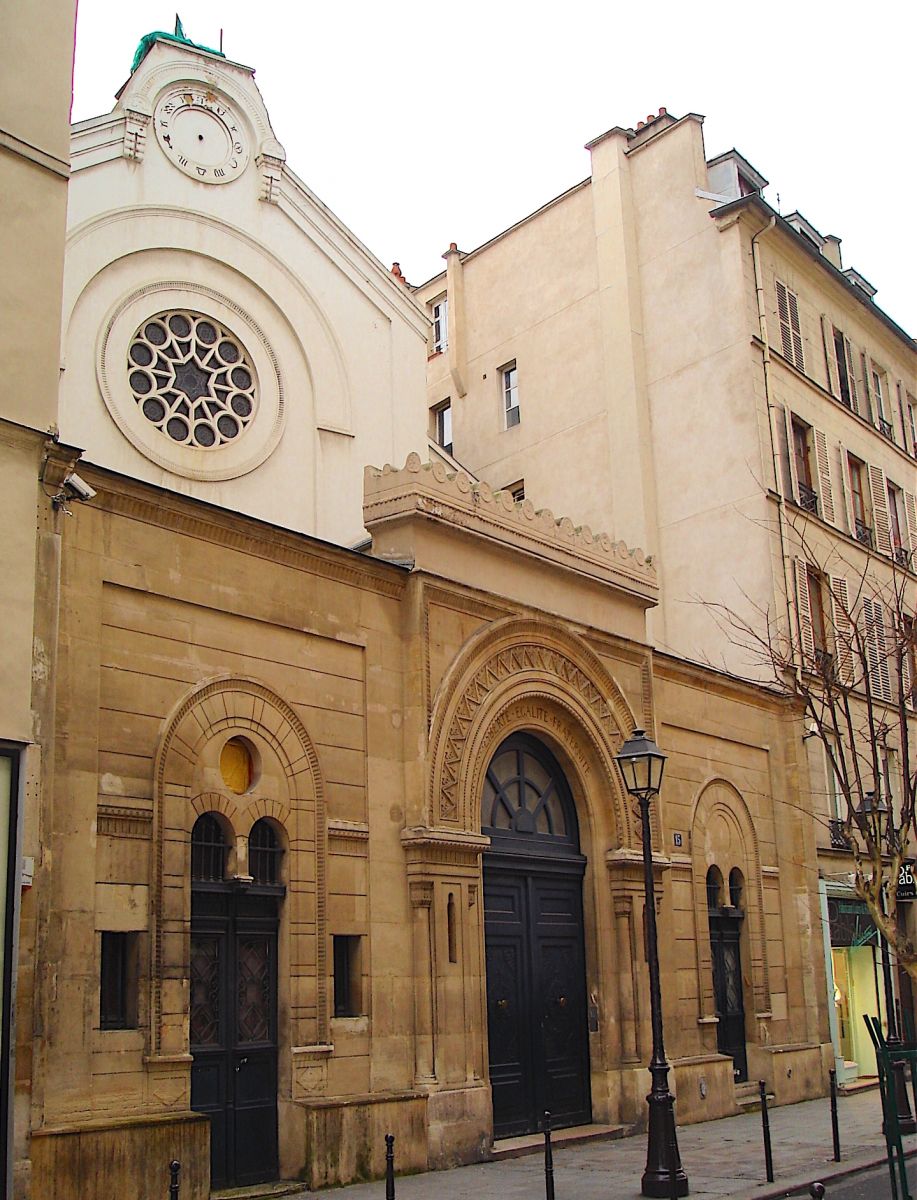 Go to 15 rue de Notre Dame de Nazareth, where you can easily spot the neo-classical building and its imposing rose window with the Star of David in its center. Classified as a historical monument, the Notre Dame de Nazareth Synagogue is considered the oldest of the great synagogues of Paris. Indeed, a first building was built by the Israelite Consistory of Paris in 1822 following the expulsion from the synagogues of Parisian Jews of the German rite (Ashkenazi), who used to live just a stone's throw from the present Museum of Jewish Art and History.

Due to construction anomalies, the synagogue closed in 1850 before being destroyed. Thanks to the generosity of Baron James de Rothschild and the plans of the architect Thierry, the present synagogue opened its doors in 1852. The place became the residence of the Grand Rabbis of France and Paris until the construction of the Great Synagogue (synagogue of the rue de la Victoire) in 1875.

During the Second World War, an attack took place in October 1941 within the place of worship, without causing much damage. Subsequently, the Grand Rabbi and his wife were arrested and killed during the deportation. With the arrival of Jews from North Africa in the neighborhood, the synagogue is now dedicated to the Sephardic rite.

Opening hours: Monday to Friday from 9am to 1pm and from 2pm to 4pm, closed Saturday and Sunday. 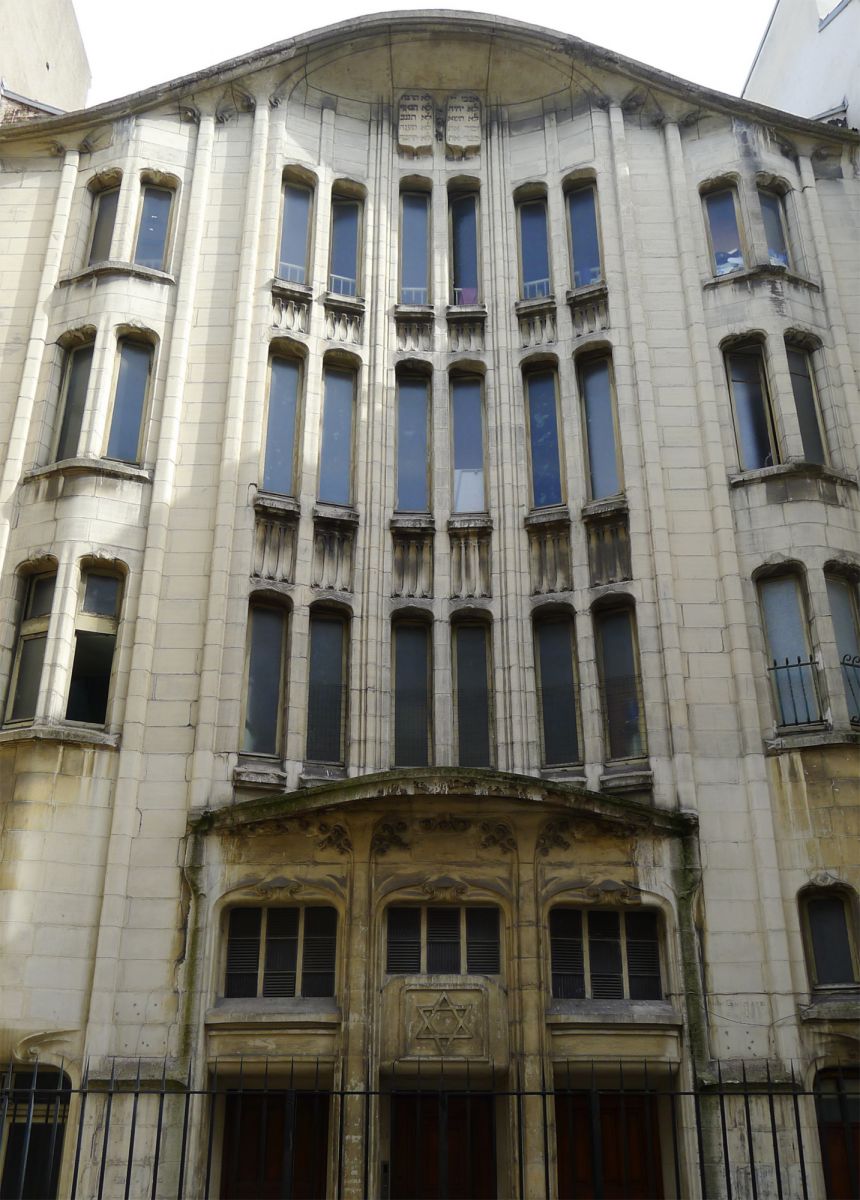 A few steps from the Saint-Paul metro station, in the heart of the Marais, stands a magnificent Art Nouveau building with an undulating façade: the Agoudas Hakehilos synagogue. The place owes its singularity to Hector Guimard, master of the Art Nouveau style to whom we owe, among other things, the famous "Parisian metro stations". The construction of the synagogue was a real challenge for the architect, who had to plan the height of the building. Inaugurated in 1914 and classified as a historical monument, it is the last place of worship built in the Marais district. 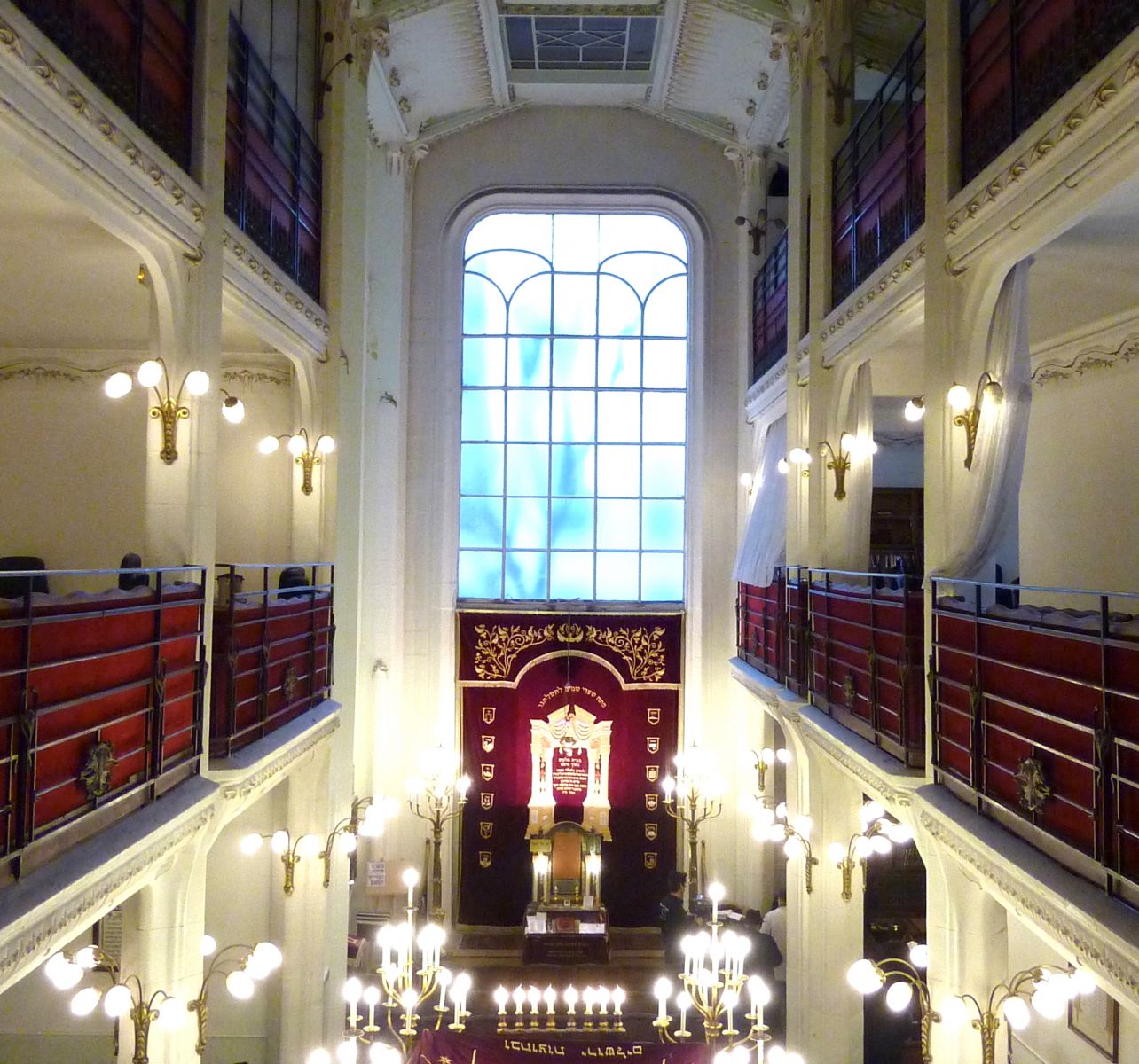 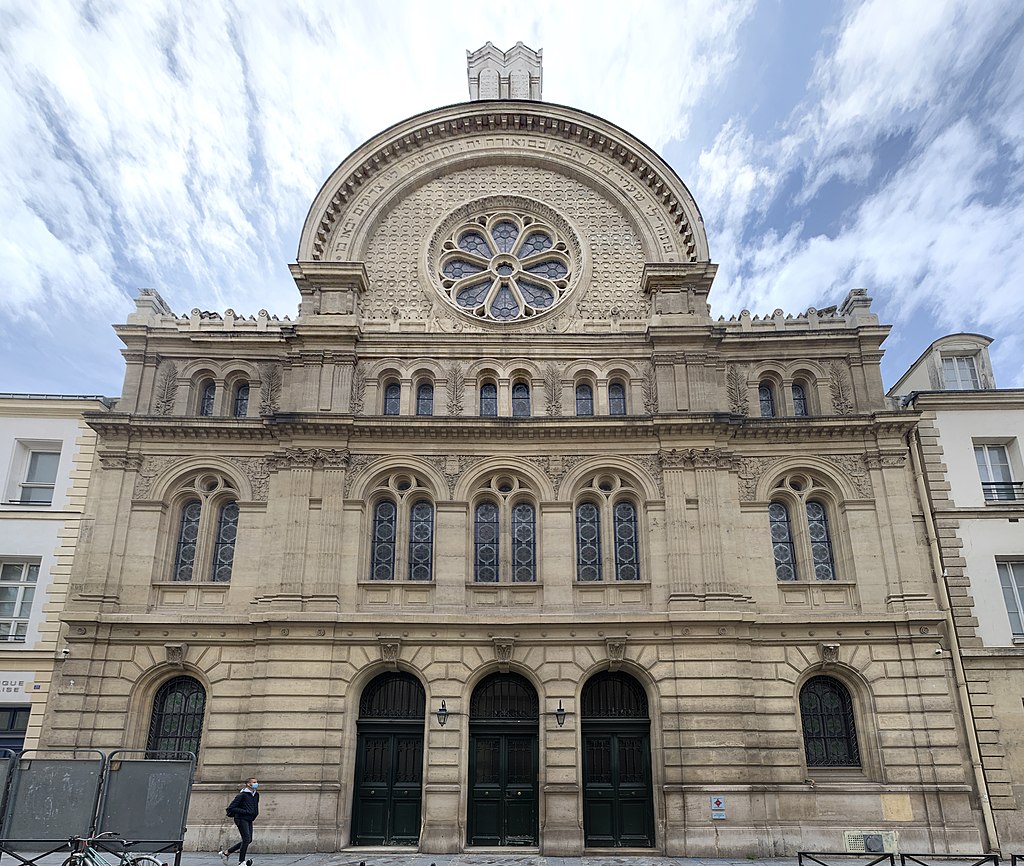 Inaugurated in 1876, on the occasion of the Jewish New Year, the architecture of the Synagogue des Tournelles was inspired by that of the churches, adding numerous references to Jewish symbolism. Gustave Eiffel even took part in the project, designing the interior metal framework in iron and cast iron. Ornaments and sculptures abound in this Sephardic synagogue, including palms, ram's horns and biblical inscriptions in Hebrew.

The Frank-Forter Synagogue was inaugurated in the 1920s for the Jewish community of Central Europe. It was not until the 1970s that it became a Sephardic synagogue. The synagogue is named after Rabbi Ray Israel Frank-Forter (HYD), who was deported and murdered in Auschwitz. 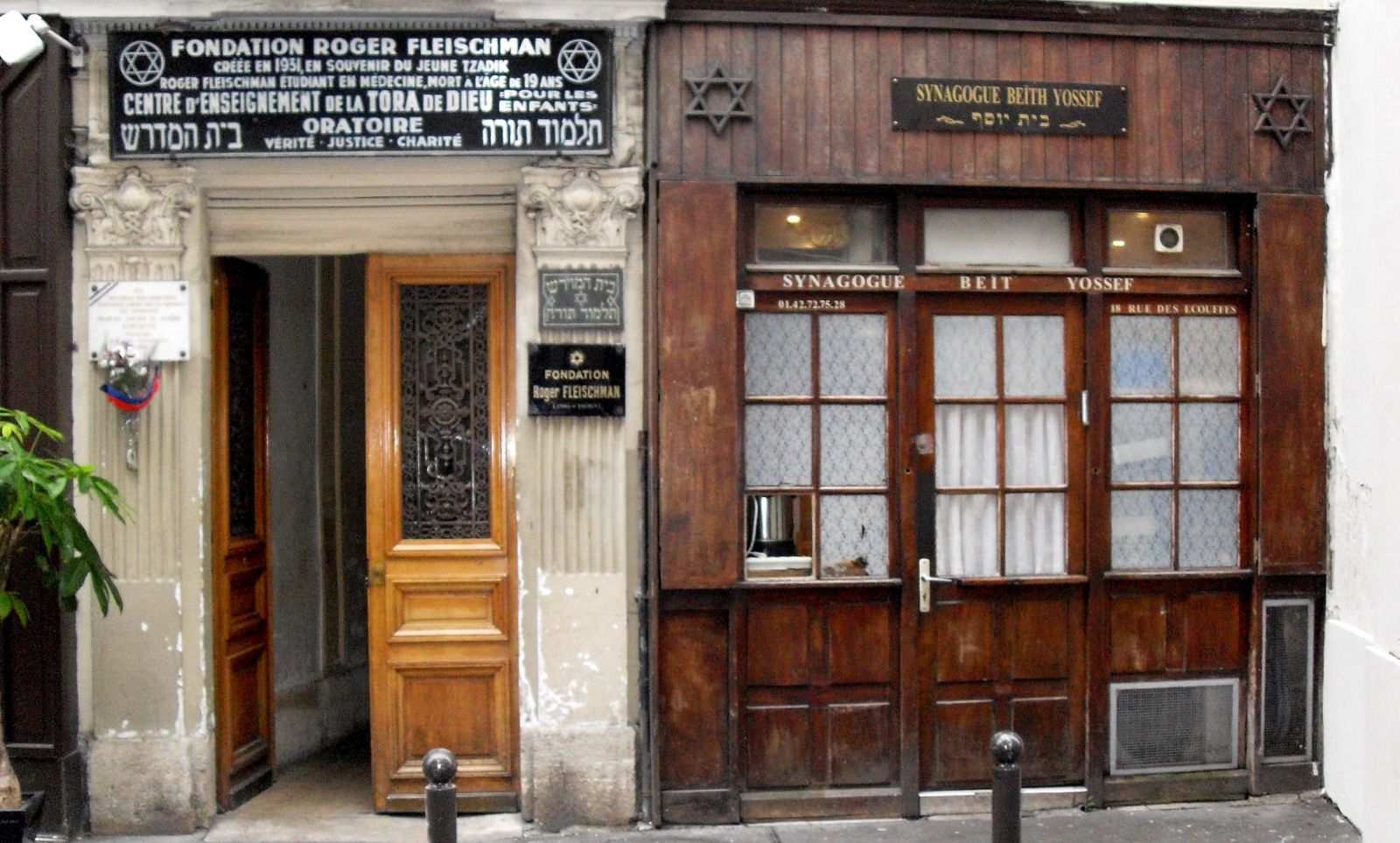 Inaugurated in 1931, the Fleischman Foundation was primarily a study center. In the 1960s, the place became an oratory for Parisian Jews from North Africa. The place was founded by Armand Fleischman (1886-1973). Born in Paris, he became an infantry sergeant major during the First World War and was awarded the Croix de Guerre and the Military Medal before being appointed President of the Fonds National Juif (FNJ) of France in 1923. In 1931, Mr. Fleischman decided to found the Oratory "Roger Fleischman" following the death of his son at the age of 19 years. The place, of Sephardic rite, is henceforth devoted to the prayer and the religious instruction. 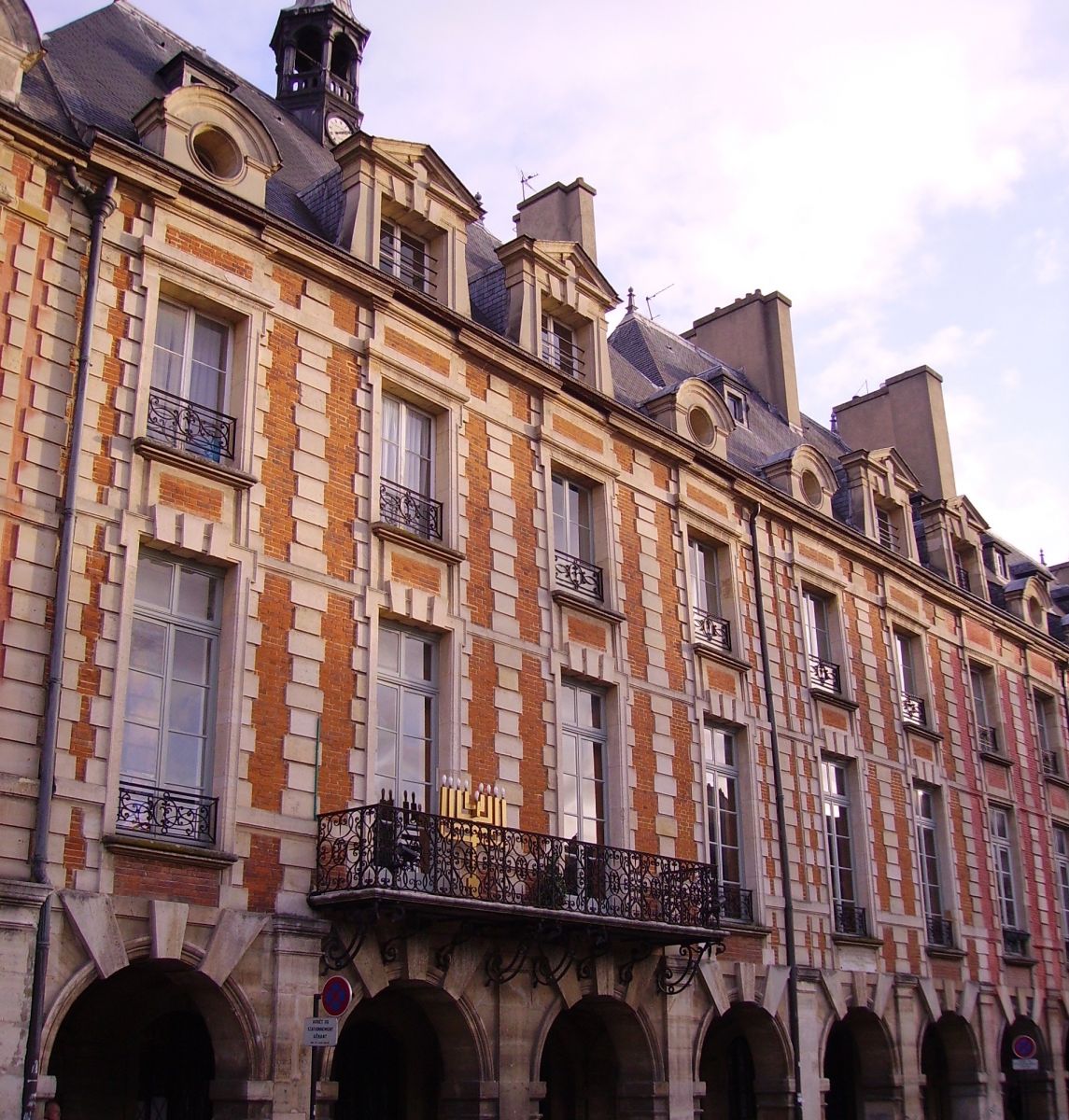 Inaugurated in 1963, the Charles Liché Synagogue takes its name from the "Hazzan" (person singing the prayer texts during services) Charles Lichtenstein. The synagogue was formerly known as the Synagogue de la place des Vosges, but was renamed in 2006 to honor Charles Liché, an Auschwitz survivor. Every year, the synagogue holds a commemoration in memory of the liberation of the Auschwitz camps.